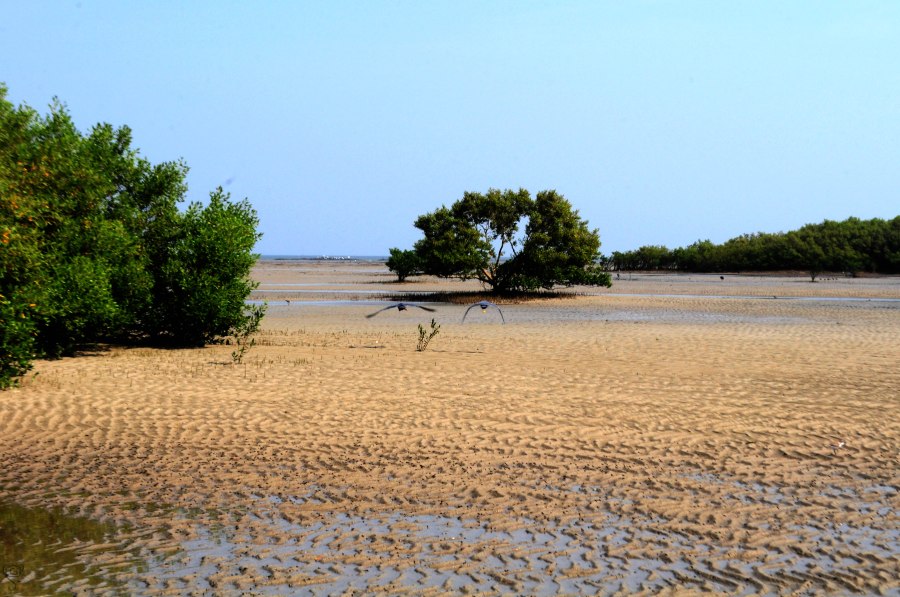 Jamnagar is the largest city in the westernmost part of India. Known for its multiple oil refineries, it serves primarily as a business centre with the little-known tourist attraction. I never thought to visit Jamnagar again, with a primary aim of tourism. Last time, long back, in my childhood it was just our air base to get connected to our then sought places of Gir, Somnath, Dwarka. I have very little memories of my past visit. But I still remember the Lakhota lake with the fort by its side, and a sleepy small town with less crowd and very late sunrise and sunset. Me being from the eastern part of India, at that tender age, was surprised to see the late working hours of sun. With time comes reformation and thus this place is a business hub now, with industries all around.

We were to visit the Marine National Park, the first one of its kind in India. There are 42 islands on the Jamnagar coast within the Marine National Park, most of them surrounded by coral reefs. With our limited knowledge and pictures seen on the internet, we were on a high level of expectation; but at times even sceptical of the unknown we were to explore. Locals had limited to no insight of this place. Narara is the entrance to the park. We kept looking for clues to arrange our trip to the Sanctuary while roaming through the city. By the time my husband was already hungry, that too for non-veg dinner, in this primarily and predominantly vegetarian state of India. Now our search diverted from tour operators/ taxi services to the non-veg restaurants. After much wandering through the lanes in search of the “Seven Seas Restaurant” (rated best among the non-veg restaurant in the city), we did discover Hotel President. This was the hotel, that arranges trips to the park, as was mentioned on the National Park website. To our wonder, we found “The Seven Seas Restaurant”, written on the other side of its entrance.

On our way up the stairs to the restaurant, we did notice many pictures of the Marine National Park, adorning its interior. We were at the right place at the right time. This hotel was a gift to suffice all our needs, be it food or the trip. Finishing off dinner we enquired about the park. We were content to gather the much-required information, book the vehicle to visit the park and get assured about the tide timings that we previously had an idea of. The most appealing part of this journey was the marine walk or the coral walk. During low tides the water ebbs, 5-10kms from the shore, leaving behind 1-2 feet of water to walk around and explore the marine life.

The fascinating part of this course is getting very close and even touching and holding the marine lives. I had previous experience of coming closer to marine life in a glass bottomed boat on the oceans but never had any direct exposure or touch. This was a unique opportunity to delve into the sea walking along with its vivid life. So our scepticism rose, with our heart pounding in a hope to sense all that we thought of. We drove through, from the packed roads to the lesser travelled ones; again through the jammed industrial way to the deserted ones, by the side of the refineries. Thus, reaching our destination, Narara. A small, newly constructed building served as the permit room. With an elderly guide, we started to walk through the mangrove forest. It was a long stretch of sandy shore with a predominance of Rhizophora mucronata among the mangroves. The low tide started at 12.30pm.

Walking through the sunbathing, aerial stilt roots buttressing the mangrove trunk and passing by the mudskippers, actively defending their territories, we entered the vast sandy waterfront. The waves and the winds together, working as a designer, paved meandering threads on the sand. The tiny crustaceans began the game of peek-a-boo, a flock of black Egret like birds fluttered away behind the mangroves. It seemed that the much-awaited show began. It was noon time and the crisp weather with the bright sun above and the pleasant breeze teamed up to provide the background score of the play. The mood was all set and we rolled up our trousers knee high, to venture into the shallow Deep. The gentle ripples were playfully caressing our feet while our guide was scrutinising the rock beneath with his sharp eyes and a long stick. He was like a magician with a magic wand and the marine lives, his props.

The first one to rock the stage was a male common crab. Our magician played the trick to hypnotise it with his wand and gently picking it up and transferring it to our hands one by one and then again releasing it slowly into the wild. Our eyes were sparkling bright with the buzz of the moment and with the wish of the rest to be unveiled. Gradually as the show advanced, we were walking over the coral rocks. The submerged rocks were overturned to show us the flashy hues of the live corals, then again released to be undisturbed. This coral reef is a treasure trove of marine life and a spectacle for bird watchers. Within this time, we spotted Egret, Sea Gull, Darter, Sandpiper, Lapwing, and few others species unknown to me. The show was on and was getting more and more intriguing. One by one, the stars appeared on the stage.

Our next star was a sloppy sea cucumber. It was an amazing experience to hold the soft little guy and then again returning it back to its habitat. Our attentive guide was scanning through the murky water while we were enjoying the walk with other tiny stars like fingerling, common crabs, seaweeds and corals. There was again another star, yes, this time, a true star. A tiny starfish. The little fellow was shy and was curling its arm, on our hands. Hits after hits, it was a tremendously successful show. We now encountered the sluggish sea anemone. It was disturbed by our presence and stealthily seeped underground, through the porous sand. By now we were the dwellers of the seventh heaven. Next star appearance was of the Neptune crab followed by the hairy wolf crab. The innocent wolf did have a star pet name, lovingly presented by the locals. It was none other but the superstar Anil Kapoor. It reciprocated its stardom by striking a pose, still on our hand, while being clicked, but crawling otherwise.

It was the entry time for our showstopper. It gave quite a run to our guide, to get hold of this puffy puffer fish. It was a bloated one, oozing out water from its mouth and the openings beneath its fins, to become a sleek body. We became concerned about its well being out of the water, but our guide revealed that it can stay out of water for a long and it is a habitual behaviour to fill in water within its body to release it later. He again refilled the puffer and handed it to us. It had four strong but tiny teeth.

To show their strength, our guide held a seashell in front of its teeth. In a fraction of a second, the puffer took a good bite of the shell. Her show was over and she was gone. The show reaching its climax, now it was time for the megastar of the event. It was a tough time to get a glimpse it. The megastar appeared with a blast, squirting black ink over our guide. It was an Octopus. Our guide smilingly said, this was its daily job to get his clothes dirty. After photo-shoot this sticky, slimy creature was released, to watch its camouflaging act. It became one among the rocks. It was an extraordinary sight to behold. Our guide took leave from us saying that he showed us all the available stars. We were left to explore the rest on our own, till 4 pm. It was the time for the high tide. We kept wandering in search of the other stars like ray fish, sea turtles, jellyfish and other marine creatures which were known to be in abundance. We could not spot any of these. So the show was over. It was our time to be back.

On turning back we were puzzled to track our way to our destination. Then we remembered our guide had directed us to walk towards a particularly thick mangrove forest, before leaving. He was seasoned enough to know about the guests getting lost in the vastness of the sea and its similar looking forest covered shore. With a light joyful heart slowly and steadily we walked through the rocks in the water, towards our destination. On our way back we again spotted few stars, now on the backstage. We did reach the shore before it was 4 pm. It was a splendid, cheerful memory to stay close and guarded within our heart, forever. I wondered how this spectacular adventure trip, is yet unknown to many. Then again I thought, the lesser known, the better it is for the wellness of this unique ecosystem. We humans are well famed to invade and destroy others habitat and life, in various ways. It is a fragile ecosystem and the biodiversity of this marine park is already under threat on several scores like extraction of corals and sands by cement industries, increased turbidity of water, oil refineries, chemical industries and mechanised fishing boats. There were two catastrophic and bleaching events in this region.

With a child like enthusiasm for exploring this unknown in such a wonderful way, we headed back towards the city. Having tasted the starter, all our scepticism vanished and increased our appetite for the main course, the 42 islands of the national park. Among them, the Pirotan Island is the popular and sole one connected to the mainland through chartered boat services. This island offers an excellent chance of spotting playful dolphins, sea turtles, ray fishes and also bird watching. The boats can reach the Pirotan island only during full tide. With the tide cycle of 12 hours, it only allows travel within this permitted timing. This left us with no option but to keep this in our itinerary for our next visit.

We finished our scheduled days of Jamnagar, on our trip. Thus exploring the unknown and enjoying this fabulous journey we were off for our next destination.

Jamnagar at a glance, with travel information. 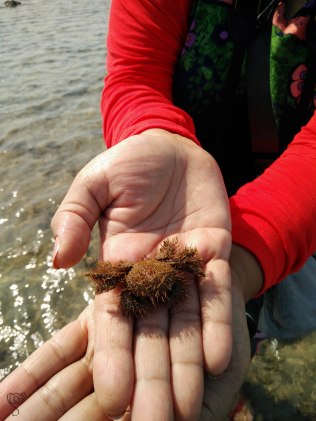 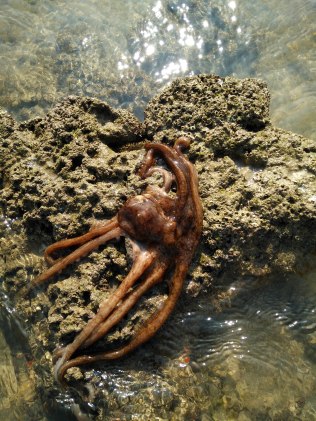 Jamnagar at a glance, with travel information.

Sometimes the moon is all I have.
May the festival of lights remove all darkness from our life and our soul, may this Diwali light up every corner of our home and our mind, may the lights enlighten our thoughts and bring peace, hope, cheer and prosperity to all. Happy Diwali!
শুভ বিজয়া
শুভ মহালয়া । Subho Mahalaya and Happy Navaratri.
On #worldtourismday, lets celebrate the importance tourism plays among all sections of society. To have a positive effect to the nation and its people it has to be sustainable tourism that preserves environment and aids in human wellfare.
गणपती बाप्पा मोरया
Loading Comments...
%d bloggers like this: