Rajmachi is a small village on the picturesque Western Ghats. Trek to the Rajmachi fort is a walk in the wild, appreciating the nature. The forest harbours an impressive ecosystem. The walk through the forest offers an excellent opportunity for relaxing and unwinding. With the much-required break from the monotonous pace of life, we planned a visit to the greens.

Maharashtra had a dry monsoon this year. Trekking in the western ghats may not be that much of fun. We were hesitant about our trip. Thanks to our lovely friend who was determined to make it happen. He travelled far from Kerala and due to some mishap got stranded for a long in the station being unable to contact us, took all the hardship for a two-day trip to Rajmachi. We were highly anxious for his well being after a long search for him and repeated trial to get in touch with him on his cell phone. After all these jittery moments, we were finally on the planned track, apprehensive for the rest of the trip.

Puna-Mumbai expressway was at its regular best providing fantastic view at every turn. We enquired about the route from food joint while on snack break. They were more interested in guiding us to Lonavala, Khandala, the much-sought tourist destinations. On our way to our destination, we were also on the beaten track, covering these two places. I did not enjoy as much. I would not say that they are not worth visit. I just did not love them but I did like the greenery and distinctive Western Ghat hills. They were packed with the crowd, some obsessed for a perfect selfie while some making shrieking noises to express their excitement while some enjoying family picnic and littering the place.

The weather was dry with no sign of rains. We started early from Lonavala, the next day with a crystal blue sky on the yet unknown route. With a not so clear idea on how to reach the base for our trek (some mentioned Karjat while others Udhewadi), we were in search of the final destination. That too was confusing as there were two villages with the same name. Finally, the Auto Rickshaw owner provided us with the proper direction. We passed by the Lonavala crossing, keeping on the highway and after 2-3kms, we took a sharp right turn towards the Della Adventure. After few kilometres we were on mud roads far from the locality, leaving behind the Adventure park. The landscape was gradually turning to dense and green. Our driver was having a tough time to maneuver his vehicle through the wet mud on the rough roads along with the ascent. On reaching a grassland, we decided to give our car some rest and make it our base to start our trek.

We entered the woods through the forest trail. The forest was dense and the road was through it was wet with patches of water. It was a mixed tropical to the subtropical moist broadleaved forest. We walked on, through the greens thrilled by the serene view. The path lead us to a bifurcation, with an old dilapidated board pointing the left road to Rajmachi fort. While the other too was intriguing enough that faded into the forest.
Two roads diverged in a yellow wood,
And sorry I could not travel both
And be one traveler, long I stood
And looked down one as far as I could
To where it bent in the undergrowth”. – Robert Frost

The moist course lead us to an open area on a little height. The hills and plateaus on the other side were visible from here. It was a greenland gleaming and glossy. The low clouds flirting playfully passed by hills caressing the vegetation. While the floor was carpeted with yellow Sonki (Graham’s groundsel, Senecio grahamii) and green shrubs. At once, all our previous anxiety vanished. Nature is such a great healer. As we gladly moved on we encountered a huge spider web with an equally big spider resting in the center. Then there was yet another, and again one and then many more. We entered the spider world. There were webs all around, size varying from large to larger. It was my first encounter with such huge spider webs. The rain god seemed to be appeased. He sent his cloud messengers to cover up the sun. Our trek became easier and the climate soothing.

We were busy capturing the sights when a blue butterfly came suddenly fluttering its wings. It’s pair followed while we stood still watching them romancing. One of them took a break to rest on the ground. We came closer to get a better shot. The blue beauty was resting on a remaining piece of a dead crab. The forest was getting denser and the mud trail wetter. Very narrow streams of water coming from nowhere flowed all over the track. This made the road slippery. The desolate path through the woods leads us to a swift flowing mountain stream. This one comparatively broader and deeper. We were looking for some other way. Also little confused about whether we were on the right track. There was no one around only we, the dark green foliage and the swift water spring. Then came an elderly couple dressed in rustic attire, from a nearby village to start their day of selling tea and refreshment. Their setup was a small shanty with very few items like tea and some biscuits to sell. They said to cross the stream and move on with a warm smile. We asked how far is the fort? They replied not too far.

Hearing this happily we rolled up our trousers and entered the waters holding our shoes. Then the ascent started. The road was even more slippery while the vegetation turned from thick forest to light with bushes and shrubs. Their colour has also turned from dark green to light and bright. We three were the sole traveller in the isolated path. I had a strange feeling of solitude in this tranquil forest. Crossing the grassland and forest we came to the Ganpati Temple which was a landmark of the route. As we moved up we could hear a loud spouting sound. Then we were in an open area with a view of a waterfall on the other side of the hill. The landscape was spectacular with the white cascade rushing down the steep rock on the other side of a deep gorge. While on our side was the shrubs of yellow flowers bright and cheerfully waving in the breeze. We took a much-required tea break with some refreshment in an isolated shack in this desolate land. After we had ourselves recharged we were on for the tougher part.

Walking continuously for more than 10kms we were eager to reach out destination soon, which waved at us, yet from a distance. Then there was water and all over the road, making our trek a cautious climb. The sun had long vanished within the clouds. Our destination seemed to be near. After few kilometres, we reached the entrance of the Rajmachi fort on the right. The road descended to a village. There were two food joints offering regional food. We placed our order for Jhunka Bhakri (a thick sauce made of Bengal gram flour served with Rotis made of Millet flour) so that we get the food on our return without delay. Read about my trek to Lohagad Fort.

The fort’s entrance had well-formed stairs. Then we reached a diversion with a sign board. The right track leading to Manoranjan while the left to Srivardhan. There were ruins of some ancient sculptures in the centre. We met the first group of trekkers here, on our way up. This was the toughest part of the trek. The fort in its ruins, offered perilous, steep narrow, extremely slippery paths to reach the top. The steps were broken with loose rocks sliding down when stepped over. While on one side was moss covered glossy straight wall while on the other side was the deep gorge. Meanwhile, the rain started making the climb more difficult. The path was very narrow, steep and craggy. The ascend was getting steeper and narrower with nothing to hold for support to climb. The view was astounding. Srivardhan fort on the opposite was already shrouded in clouds. A breathtaking and compelling sight to behold. Our hardship was rewarded well by nature.

We were in within the clouds by then. The mist had covered this part of the fort too. The downpour turned heavy. We decided to climb down. The descent was even more tenacious. With watchful judicious steps, holding each other for support we came to the foot of the fort. We were wet, hungry and tired. The food was ready. We gorged on the steamy delicious food. The shack satisfied our eager stomach as well as provided us with a dry shelter to rest in this heavy shower.

The Narrow Path to the Fort 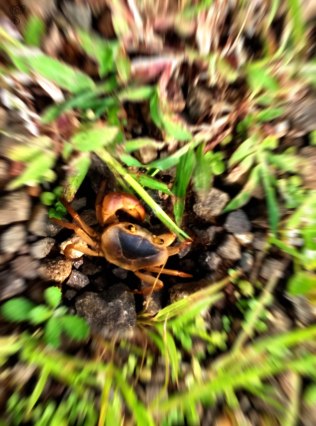 A Baby Crab on the Way

On our return path, we came across few groups of trekkers on their way up. Some already tired and wishing to abandon the trek. They enquired from us the distance remaining. With an unknown pride and content in our voice, we replied, ‘yet a long way to go’. We also encountered few over enthusiastic, super adventurous group of trekkers. They had little respect for the serenity of the place and the delicate natural environment. They forced up their four-wheelers and motorcycles through any grassland or open space destroying the vegetation beneath. They crushed the crabs and other little ground lives, on the road, also mashed the vegetation making a deep impression of their heavy tyres on the wet soil. I had a strange feeling of insensitiveness. We humans have always been rude to nature. We enjoy all the benefits but we return no gratitude. I long to see the day when we humans will learn to love and respect the environment we live in.

Rajmachi at a glance, with travel information.

Rajmachi at a glance, with travel information.

5 thoughts on “Hike to Rajmachi”

Leave a Reply to The Wanderer Yogi Cancel reply