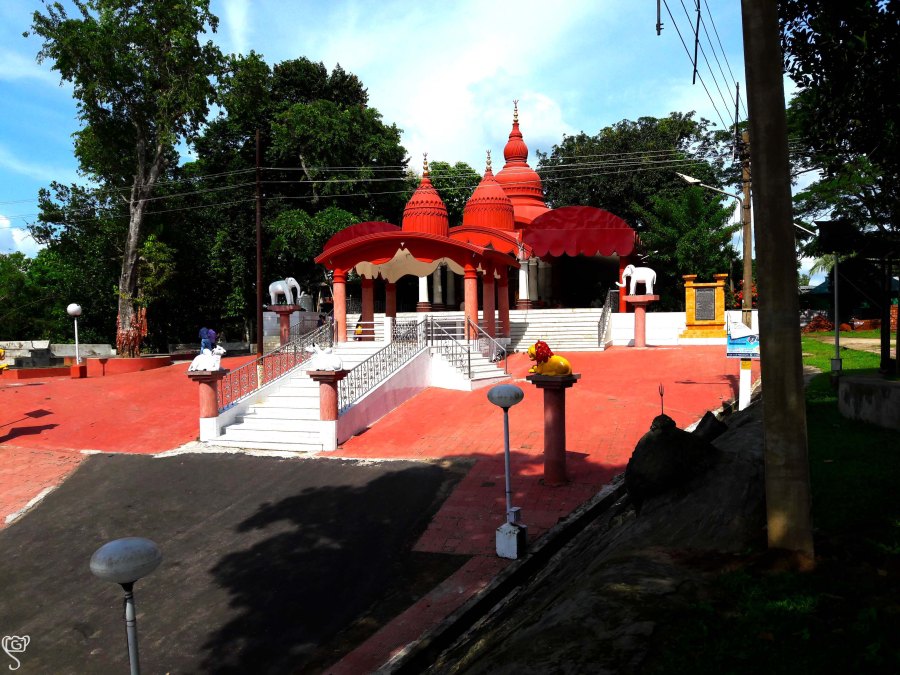 Beating Retreat is an old military ceremony practised in England for the retreat of the patrolling forces to the castle. This ceremony was called Watch Setting as it used to coincide with the sunset followed by the single shot fired by the gun. In India, beating retreat signifies the official end of the Republic Day celebration. While the Retreat Parade and flag lowering ceremony of Wagah Border is also well known. This practice is followed by the security forces of both the countries (BSF – India and PR – Pakistan) since 1959. The same is in practice on the other side of the nation too, though is lesser known.

The Akhaura Checkpost in the western part of Agartala is a border terminal between India and Bangladesh. This multi-use Integrated Check Post (ICP) has been developed recently to facilitate trade and transport between the two nations. This is the second multi-purpose ICP after Attari, in India. (Read my experience in Wagah.) This ICP is well equipped with new technologies to handle goods transfer, there is a proper warehouse, watchtower, export-import zone and also passenger terminal. The retreat parade of the beating retreat ceremony along with the lowering of flags is also held here every evening.

We were here to watch this parade. Without any proper knowledge, we reached the venue an hour and a half before the time. The on duty BSF Jawans with a welcome smile on their faces asked us to roam around have some tea and snack in the surrounding area to pass the extra time. The entry gate will open at 5 pm. The barbed wire border was at a distance of 1 km from there. There are human settlements even near the zero point of the border. Lined up, loaded trucks were waiting by the road, probably to cross the border.

Large water bodies were all around. Tea stalls and shacks on the bank of these are made of bamboo shafts. More than three fourth portion of the structure stood on the poles submerged within the water while the other end was docked to the land. We entered one such tea stall. The lady owner of the stall spoke of the life near the border.

She said how closely the citizens of the two nations live. They can see the daily life beyond the border and vice versa. Some had their farmland, some had their toilet and some had their bedroom beyond the border. “O Bondhu! Bhalo aacho to?” (Hey friend! How are you?) They even exchange verbal pleasantries, calling their friend on the other side. She smiled and said. When asked about the illegal immigration situation, she replied that this was a tough zone with zero tolerance. Once a middle-aged Indian citizen tried to cross the border at night illegally, to reach the other side. He was captured by our soldiers and beaten near to death and brought back to the check post for legal proceedings. She laughed and added, few weeks this was a news in this tiny village.

After the ‘Chai aur Gup Shup’ again a long wait and then the gates were opened. Few locals and we gathered on this side of the check post, even fewer on the other side. As the check post gates opened, few Bangladeshi trucks returned back to their nation after unloading their goods in the warehouse. Then it was time for the walking passenger’s immigration. Just three for this day, that too from the other side.

It was the parade time, the men were requested to move back while the women were asked to come forward. Few chairs were provided for the women. The BSF Jawan, in charge of the management, asked the audience to stay disciplined and requested to mute the mobile phones and no sound and no slogan during the parade. The rain and the parade started together.

Along with the frequent loud orders, commenced the ceremony of the disciplined march, followed by the brusque handshake, the simultaneous lowering of the flags of both the Nations, procedural folding and then retreat. The visitors were allowed till the zero point of the iron gates for clicking the pictures. The gates were closed to mark the end of the ceremony.

Tripura is surrounded by Bangladesh on three sides. (Read my experience in rest of Tripura.) People of the two Nations stay in close proximity to one another. The other place where I came so near to the International Border was the Kashbeshwar Kali Temple. The temple is on a small hillock overlooking the Kamalasagar Lake just by the border. The Manikya dynasty had left its sign all over Tripura. This temple was built by Maharaja Dhanya Manikya so as the adjacent Kamalasagar lake. The lake was named after his wife.

This is a serene destination with the vast lake surrounded by greenery. The small hillock with the red coloured Kali Temple on its top. The presiding deity of this temple is Goddess Kali in the form of ‘Dashabhuja’. Just beside the lake is the barbed wire. The other side is Bangladesh. On the Bangladeshi side, there is a big empty marketplace. Every Tuesday the market opens from 10 am to 4 pm. The same day the gates of the border are opened for citizens of both the nation to visit the foreign land depositing their ID proof. They are not allowed to cross certain distance limits. The BSF and the BR soldiers take special care of that.

Many Indians visit the market on Tuesdays to purchase fishes (especially Hilsa), sarees and other cloths of which Bangladesh is famous for. I missed this golden opportunity to step on to my ancestral land. I was engrossed in a feeling of strange pain. Once upon a time it used to be one Nation. People used to stay together, celebrate happiness and festivals together, mourn during sorrows together and even fight for the struggle together. They were friends, they were family, they were relatives, they were neighbours and well-wishers. The happiness, the sorrow, the struggle, the culture, the festivities, the language, the people – all remained the same. What changed is the relation – sometimes brothers and now foreigners, just a barbed wire in between with distance so far apart.

The Deity of Kashbeshwar Kali Temple

Tripura at a glance, with travel information.

Happy Saraswati Puja
May this spirit of innocent love, respect and faith for the nation and its flag last forever and with time, transform and mature into true patriotism. Wishing all Indians a very happy Republic Day!
My first attempt at capturing the Milkyway. Read my story here: https://footloosein.me/2023/01/25/dubare-elephant-camp/
At Bati Chokha, Varanasi
Blue Lassi Shop in Varanasi, is famous in the city for its Lassi (as the name says.) The delighted customers write and stick their testimonials along with their pictures on the wall.
The casual morning of a Ghat in Banaras.
Loading Comments...
%d bloggers like this: