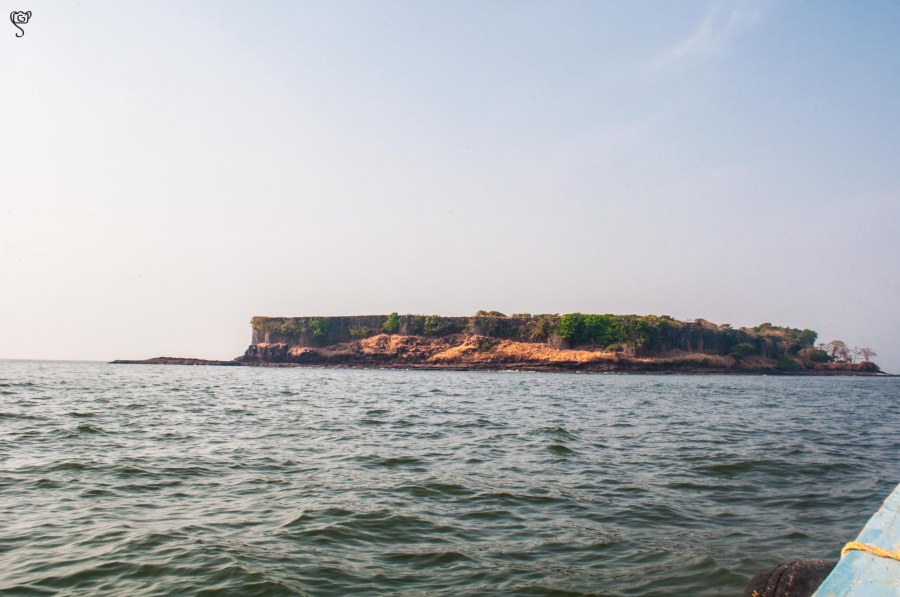 Must be wondering what so fishy about Harnai? Harnai is the beach famous for its fish market. Every afternoon after 4 starts the auction. The fresh catches are laid by the muddy beach. Thousands of customers some for wholesale while other for personal consumption, gather here to grab the best deal. Situated in a scenic location Harnai is a natural harbour with a number of forts and a lighthouse. My fishy tale is not just about the fish market. It’s a lot more than that.

This was the last stop of our road trip along the Konkan coast. From Ratnagiri, (Read my experience in Ratnagiri.) we drove straight to Harnai. I was too much into the Suvarnadurg Fort, on my previous visit to Karde and Anjarle. (Read my experience in Karde and Anjarle.) Due to some reason I had to remain content with a distant view. There are few more forts in Harnai, but the sea fort of Suvarnadurg seems more appealing. Although the lighthouse in the Kanakadurga too was luring me enough.

I decided my pick for the day and chose to visit Suvarnadurg leaving the rest for the next. Suvarnadurg which means golden fort is surrounded by sea on all sides. The fort is located on a rocky island at a distance of around 1.5 km from the Kanakadurga fort on a projection on the Harnai shore.

The Kanakadurga fort is a harbour fort. It also houses a lighthouse. It is built strategically to connect the sea fort of Suvarnadurga. The Kanakadurga, Fatehgarh fort and the Gova fort were built to keep a watch on the Suvarnadurga. These forts are built on the edges of land protruding into the sea, separated by narrow channels.

The Suvarnadurg fort has two entrances, the Maha Darwaja and the Chor Darwaja. The Maha Darwaja, built above the high tide level, faces the landward side towards the Kanakadurga. The Chor Darwaja faces the seaward side. In ancient times there was a connection between the sea and the land fort through a tunnel. This is now obsolete.

The only route to the sea fort is through boat from the Harnai jetty. There is no jetty on Suvarnadurga. So landing and boarding are done either on the rocky shore or the small sandy beach. The purpose of this sea fort was to keep a watch on the sea and protect the land from any approaching enemy from the sea.

As the history goes, the fort initially belonged to Adil Shah II. Later it was captured by Chhatrapati Shivaji. For a considerable amount of time, this fort was under Kanhoji Angre. He was also called ‘Samudratla Shivaji’ (Shivaji of the Seas). He was the Admiral of the Maratha Naval Fleet. He was one of the first notable chiefs of the Maratha Navy. He fought against the British, Dutch and Portuguese. At a certain period in Maratha rule when Shivaji’s grandson was imprisoned, Kanhoji claimed for independent rule. He was granted 26 forts along with its dependent villages. With his new ordered control, Kanhoji held complete control over the Konkan coast making Suvarnadurga his stronghold of activity.

With such riveting accounts on the historic and geographic description of the fort, I could not restrain my excitement to visit the fort. The sleepy fishermen village welcomed us with the overpowering smell of fish and the sights of vast nets piled up on either side of the road. Numerous trawlers anchored near the jetty.

The vacant jetty with a couple of boatmen, some taking an afternoon nap to energise themselves for the evening activity. That of the fish auction and boating the inflowing tourist to and from Suvarnadurg. Unhappy to be disturbed from their sweet slumber they were reluctant to take out their boat.

Soon joined by another family of three we had a better chance to hire a boat. On extra payment, we hired a boat which otherwise takes the fare on a seat basis. A boatman accompanied by another as a helping hand took us to the island of Suvarnadurg. The fort can be approached only during the low tide condition when it is also easier to walk in the precincts of the fort. With no jetty to anchor, we had to deboard the boat on the slippery moss covered rocks. Greasy enough to make our co-passenger slip and hurt himself. This was an unpleasant beginning of our venture into the fort.

The fort occupies the total area of the island spread across 8 acres. It is surrounded by tall fortification along with dry moat from all sides. The fort tapers towards the Kanakadurga end. The enclosure is covered with thorny bushes and wastes left behind by humans after picnicking in this deserted island. From every angle, there was no sign of maintenance. The sorry plight of this important historical monument saddened me.

The fortification around the fort has small built in rooms around the bastions. During ancient times the interior part had two granaries, structures for storing ammunition and shipbuilding facilities. There were several fresh water tanks and a step well. No structure can be identified today. With wrecked structures of the foundation plinth lying in utter ruins covered under the debris of negligence and disrespect.

The view from above the fort wall is majestic. On our request on our return trip, the boat was brought near the sandy beach but could not be pushed up to the shore. We had to climb up a tall ladder to get on board. Our co-passenger has again hurt himself. Resulting in a big bulge on his forehead. An experience not so pleasurable but an adventure worth speaking about. Even without the fishes, the journey appears fishy. Right?

On approaching the jetty we could see large numbers of people gathered by the shore. A lot of hustle and bustle. As the humans gathered so did the birds looking for an opportunity to snatch a fish. Numerous trawlers and multiple small and large vehicles have harboured by the shore. And there were the bullock carts, the symbolic vehicle of this area to carry fish to the local market.

The sleepy shore is now buzzing with activity. The fish market has opened for the day. So did the side market of ice boxes and other items. They take the advantage of the crowd gathered to sell their items in the melee. Not very familiar with the names of numerous fishes laid by the beach. I walked around in the crowd to capture the sight. I would rather take you to the fish market with the help of my pictures. Hectic as well as calm our journey was mixed with a lot of emotions – at times overjoyed and at times disheartened. We saw many places and met many people, acquired knowledge in our glorious history. And thus ended our road trip through the Konkan coast.

Ratnagiri at a glance, with travel information.

2 thoughts on “The Fishy tale of Suvarnadurg in Harnai”