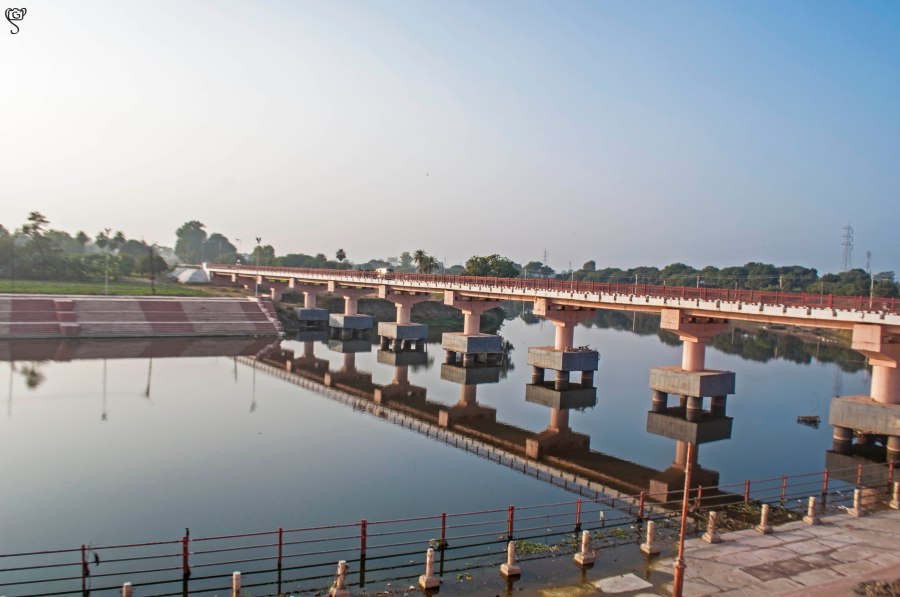 The proposed smart city of Ujjain can better be called as a temple town. Known for the famous Mahakaleshwar temple, it has many other temples of equal religious importance. Mahakaleshwar is a Jyotirlinga, one among the two in Madhya Pradesh and the twelve in India. This city by the bank of the Shipra river and numerous temples scattered within its precincts leads to a beautiful religious tour.

With an urge to tick off one from the remaining bucket list of Jyotirlingas, my father planned the visit. Now, me the dutiful daughter grabbed the opportunity to make it a trip. With the chant of “Har har Mahadev” we started our Ujjain trip.

Sights similar to other religious places like stalls selling religious offerings, some eateries while others selling religious souvenirs line up on either side of the road. A man robed in priest like attire rides on an elephant to gather his and his pet’s living. I would come back to this elephant tale later.

First, let’s visit the temple. Due to some unknown reason, probably I was not in the proper state of mind. The crowd and the distance of the temple were bothering me. We mistakenly entered the so-called VIP queue, paid the designated per person rate and entered through some side gate to cut the crowd from the main entrance which we could not yet locate.

After many roundabouts which seemed to be puzzling enough we were finally into the main temple. This is where we got the feel of the crowd. Hundreds of pilgrims gathered to pay a visit to the great lord Mahadev. After the regular temple type pushing and shoving, we found ourselves in front of the deity. Thus we did our darshan and in seconds again hurried by the security personnel to make way for the others.

Finding the way out was again confusing. We did manage to get back to the starting point. Collected all our belongings from the locker where we had to deposit all. The elephant with its priest like Mahout was still on its collection drive. Every passer-by was offering something to the elephant. He was happily accepting bananas, chapatis, guavas and even raw rice which was offered by the roving sadhus from their part of the collection.

Probably the elephant was a guava lover. While we were purchasing some from the roadside trolley, it sluggishly turned its bulky head towards us. Probably his way of saying he wants some. Soon we offered a few and it happily binged on in and later moved forward. But the best part was watching the way it was eating the raw rice.

This lightened my mood and further brightened by the green and peaceful surrounding of the Mangalnath Temple on the banks of the Shipra river. The bridge crossing over the calm waters of Shipra and the green farmlands with the soft rays of the afternoon sun reflecting in the waters. A serene location in this crowded city.

Now traversing through the green fields and passing by the high walls of the Ujjain Jail we reached the place of the drunken master. No no, don’t be shocked we did not travel to Hong Kong from Ujjain. 🙂 Let me clear the confusion. It was the ancient Kal Bhairav Temple. As per the common belief carried down through generations the God is pleased only by the offering of alcohol.

The deity is has a silver head and an open mouth. The priest pours the alcohol brought by the devotees in a saucer and then into the opening of the mouth. Hundreds of devotees visit the temple every day. Most of them offer the god with alcohol. So after drinking throughout the day how can, he remain sober, thus the I coined the name of the drunken master.

While the drunken master was soaking more of alcohol inside the temple, the monkeys outside were stuffing itself with bananas, branches of chickpeas and other stuff offered by the visitors. The usual temple side business was on. People selling monkey feed, while stalls selling alcohol and other offerings for the god. Other than the offering some were seen to purchase liquor to carry back home, probably for personal use.

It was pure fun watching the activities in and around the temple. I was busy capturing the moments in my camera when an ash-smeared wandering sadhu whom we crossed, on our path at a good distance arrived. I was amazed to imagine his speed of walking. This is when the vendors selling the branches of chickpeas as monkey feed gave out a call. “O madam! Hum gariboon ki bhi photo khinchiye, aur net pe daliye famous ban jayengi”. (Madam, please click us poor people and post them on the internet and become famous.)

This incident shocked me and pained me equally. Strange and complicated is the human psychology. How can someone’s pain be a way of earning fame? To me photography is a means to capture my memories. And the intention may vary from man to man. Although actions are interpreted in many ways. The social strata, the time and the mental state all play a vital role in our thought process. I became thoughtful and entered into my own world of fantasy. Little to realise that we already left behind the Kal Bhairav Temple and Ujjain too.

Ujjain at a glance, with travel information.

One thought on “The temple town of Ujjain”