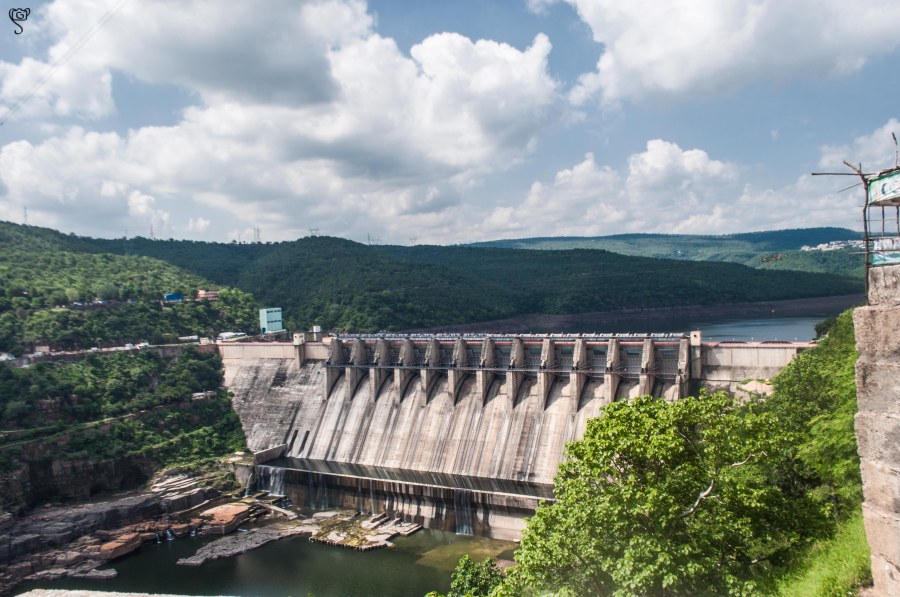 My father’s target this time was to tick off the remaining one on his bucket list of Jyotirlingas. I joined my parents in quest of exploring a new destination and also visit a state newly formed. The temple remains in the old state while it is conveniently connected through the old city of Hyderabad in the new state of Telangana. I did expect an interesting journey… it turned out to be an overwhelming experience.

I already heard from a friend that the road to the temple is through a forest and the drive is exciting. Since then I had no plan to miss this opportunity. Hyderabad is the nearest and major city connecting to Srisailam we chose this to be our base for Mallikarjuna darshan. And also take this opportunity to recollect some old memories of visiting the city.

Accompanied by Murlidhar, our driver who was well accustomed to the area and the roads, our journey became even more smooth and memorable. He advised us to start early to avoid the rush in the temple. We acted accordingly. We started at 6 am in the morning.

After crossing the city limits the road was all for us. No other vehicles with our car dominating the smooth silky road. Then entered the fog, covering the region with its white layer. We had to slow down as the visibility was lowered. With the passing of time, the sun pushed off the fog to spread its golden glow around.

We stopped for a tea break by a roadside restaurant. The staffs were busy cleaning to start their business for the day. As we sipped on the hot beverage, a tiny bird carrying a long shaft of grass caught my attention. Observing closely I found it to be a Scaly-breasted Munia accumulating grass for building its nest on a crevice above the entrance.

I kept watching how meticulously it picked up each shaft and flew up to insert it in its nest. Sometimes it fell off from its tiny beak. It again came down to pick it up and flew off to its nest. Hardly bothered by the presence of the restaurant staffs, it kept on with its morning duties.

With no further delay, we started again. The view was pleasing as before. As we entered the forest area and the twist and turns began. Not only because of the curvy roads but also because of the monkey speed breakers.

What are monkey speed breakers? This must be the question arising in your mind. Every vehicle passing the forest road offers food to the monkeys of the forest. As a result, the monkeys have developed a habit of human food. This made them lazy enough to search for food in the jungle rather wait by the highway for the easily available food.

In recent years there have been many incidents of monkey death in accidents from fast-moving vehicles. To prevent this, numerous speed breakers have been installed. At least a couple of speed breakers in per kilometre of travel in the monkey dense area. Other than these the monkeys sit all across the road creating a natural speed breakers. Thus monkey speed breaker.

All through the forest area, there was some monkey dominated areas and all had these speed breakers around. The road through the forest canopy provided a pleasing drive. The bright sunlight created multi-shaped shadows of the trees on the road. It seemed as if the road was stripped with dark and light paints.

I cast a glance on the roadside board. It was the entrance gate for the tiger safari. From the moving car, I could not see the safari timings. I planned to stop and take a safari ride while on our way back. And the forest continued and we continued through the forest. The view was so pleasing that there was no opportunity to doze off. I previously planned to make up my loss of sleep on our way. But now I am overly delighted to miss the sleep opportunity.

As the forest area ended there were scattered localities along the way. Those seemed like the residential employee quarters. Murlidhar informed those were the property of the Srisailam Hydroelectric Power Plant. And we were very close to the dam. I was excited to hear this.

After a hairpin bend, the huge dam was in front of us. The Srisailam Dam is one of the major dams in Andhra Pradesh and also the second largest working hydroelectric project in India. This dam is built across river Krishna.

The topography comprises the rugged slopes with the rocky river bed meandering below. The dam and the reservoir above has disrupted the free-flowing river water. As a result, the river bed lies with exposed pebbles and rocks and little water.

Approaching closer to the main temple, the surrounding was mostly like any temple town. But less cluttered and less populated as compared to other religious destinations. Various religious sculptures were seen atop buildings around. On reaching the temple premises, as expected the crowd was less.

Keeping the bags, mobiles and cameras in the locker room we entered the pious temple premises. There was not much crowd as said earlier, so we were guided by the mace-like barricade towards the main temple. Then there was the sacred Nandi and few devotees performing some religious rites. Some elderly ladies clad in saffron attire, probably from some religious organisation were chanting sacred hymns. This is when the aarti ended and we were allowed into the temple.

I was surprised as well as pleased to have a crowd-free darshan even in this temple famous as a Jyotirlinga and also a Shaktipeetha. I fear gathering and crowd in any place and the same applies even to any religious destination. So the visit to Mallikarjuna temple was a welcome change. After the dev darshan, we climbed the blazing stairs to reach the temple of the goddess. The stone stairs were terribly hot from the direct rays of the scorching sun.

Our pain from the blisters on our feet was soothed by the delicious sweetmeat offered as prasad to every devotee while exiting the temple. After a simple, satisfying and filling lunch from a nearby restaurant we were on our way back. As we finished early Murlidhar informed that we have enough time so if we are interested he can take us to a waterfall a few kilometres off the track.

At once we grabbed the proposal and started off with renewed energy. Few kilometres through the same old track and then a turn through the village road. The road was not paved but it was a simple, smooth road made of red soil and tiny chips. Villagers were seen returning home after their hard work on their farms.

There were huge cotton farms one after the other separated by the fence. Multiple sarees were attached all through the fences. Pinkish white cotton flowers were peeking through the green stretches of cotton plants. It seemed that this year will see a good harvest. But if it can be saved from the hungry bears.

The unwashed sarees fencing the borders provide the human smell as the primary barrier to scare away the bears. Then comes the large tin containers hanged by the fences with ropes attached to the guardroom on the raised machans within the fields. This is the second line of defence. Even if the bear crosses the fence the guards on the machan pull the rope to sound the tin containers and also use firecrackers to ward off the bears.

The Mallelateertham waterfall is located within the thick forest cover. The site will be completely ready to welcome visitors in next few months. We reached the entrance no entrance fee was charged even though the employees or the caretakers were present at the ticket counter. Through the broken stairs on the steep slope, I went down precariously. After a certain point, it seemed I was getting down into a sinkhole in the thick forest.

A thought twice – should I continue down or shall I get back? There was no one around and I did not feel very confident. I looked back to see Murlidhar was coming down although he was at a distance. My parents gave up long before. I gained some confidence and continued. The so-called steps vanished and it was all loose rocks and soil. After an adventurous trek down, we entered the secret chamber within the trees.

Yes, it was a secret chamber obscured within the hills and the thick forest. A small portion of land with light vegetation surrounded by hills with dense vegetation. There was little light as the forest foliage did not allow much light to enter. Then the waterfall was at sight, flowing down from the bounding hill and then cascading towards a narrow slope and finally disappearing into the forest.

I was not much awed by the beauty of the waterfalls. But definitely, the location added a charm to the place. Having seen a lot of many of good renown this could not make its mark on me. But yes, the trek, the surrounding and the feel of getting down to this place was different and an experience of its own kind.

Satisfied and exhausted we climbed up through the same treacherous track. Planned to have a refreshing tea on reaching the entrance. But it seemed the workers had finished their day’s work and were ready to indulge in their addictive habits. The tea vendor was in no mood to sell us his tea. So we had to hit the road to be out of the forest area to get the roadside stalls for some tea and snacks.

As our vehicle stopped near a stall we could see the monkey menace. They are so used to human food that they try every possible way to snatch if not provided. Murlidhar says in recent years with growing awareness and forest department orders feeding the monkeys has lessened but sadly continues. Monkeys were trying to have their food from anything and everything.

After a refreshing tea, we were on the highway to get back to Hyderabad. This time we were accompanied by herds of sheep, cows, goats and buffaloes. Mostly the gipsy community survives on this livestock rearing. For a long stretch of the road, we were along with such groups taking back their herd to their temporary home. Thus we too returned back to our temporary home in our hotel room in Hyderabad, ending a religious journey in a beautifully adventurous way.

Mallikarjun at a glance, with travel information.