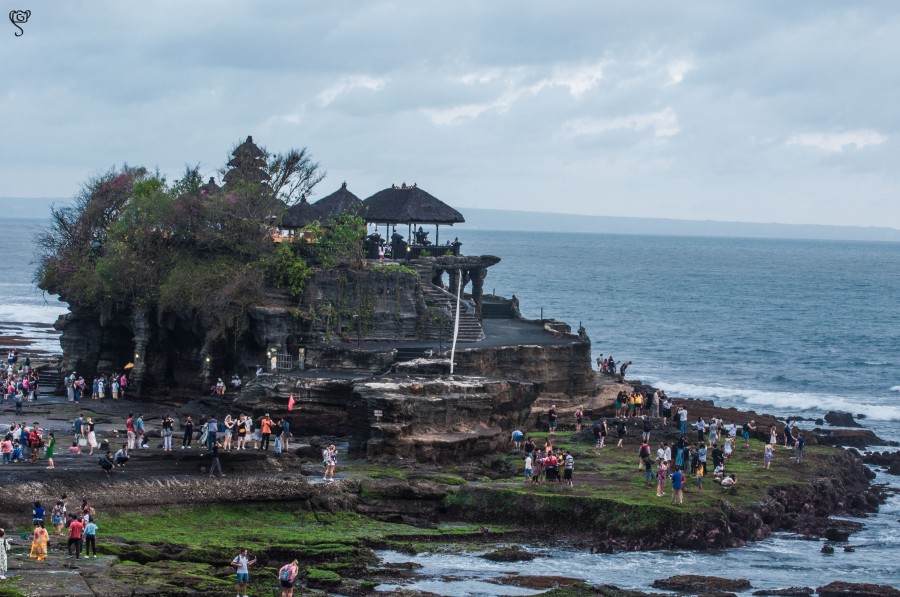 Tanah Lot an interesting name, so is the place – enchanting and pulsating. This is the reason I decided to write a separate post on Tanah Lot. Known to the world as a popular tourist destination, this sea temple in Bali is much beyond a religious destination. There is a sense of serenity even in the gathering. I will take you through this journey of tranquillity in the teeming sea of people in Tanah Lot.

I had the hint of Balinese smell on landing at the beach airport of Bali. I like to call it a beach airport. Beach airport because it is surrounded by sea. The plane descends almost into the sea and then the tyres touch the ground of the runway. Such an amazing landing. This is when I smelled the essence of Bali.

Then on the way, there were pretty sculptures all around. Decorated poles made of bamboo shafts and other natural stuff were seen on either side of the roads. There were some Candi Bentar which are split gateways and are very common in Bali. The not so broad clean roads taking us to another coastal area of Bali. We were travelling from Denpasar to Tabanan.

Moving away from the city limits we were driving through the paddy fields. I thought if we were in the famous rice terrace of Bali and in some time we will be able to see the vast and beautiful terrace cultivation on either side of the road. But our driver said that is in other direction and these are just the plain old paddy fields.

As we entered the Tanah Lot area the place seemed to be touristy with a lot of vehicles and peoples too. Again through a Candi Bentar, we were on the crowded lanes. I think I must stop mentioning the Candi Bentar now as at every turn or almost everywhere you find a Candi Bentar in Bali. Keeping a count would definitely be a foolish thing. But I was so engrossed by the charm of these split gates that I could not stop pondering about these.

The car then entered the hotel premises. In the busy, touristy, market area but still a secluded, peaceful haven. Located amidst the greenery of the tropical garden and bright orchid flowers the beautiful Natya hotel had tastefully decorated Balinese cottages and a lovely swimming pool. Above all, I made a new friend here. Made Nurtini – the beautiful lady in the reception who welcomed us on arrival with a beautiful smile.

A beautiful gate nearby

She coordinated with us arranged vehicles and took very good care of us. The best part was when she was on her day off and could not inform us before, she took the effort to find me on facebook and sent me a message of her absence the next day and also informed about her colleague who will be present to take care for us. This was a sweet and a rare gesture.

During our stay, I asked her permission to capture a few moments of her. She happily obliged and beautifully posed for me. She even clicked some lovely selfies with me. I am still in touch with my new Balinese friend. She was so eager to see her photo on the internet. But it took me some time to write the post and I am sure she will understand.

Now coming back to the tourist destination the Pura Tanah Lot which means Tanah Lot temple. This is a sea temple located on the western coast of Bali Island. The temple is situated on the top of an offshore rock that has been continuously eroded by the ocean waves to give it a strange and interesting shape. Much of the rock has been eroded. To prevent this venerated site, the rocks have been reconstructed skillfully to give it the same natural look.

The temple has a history too. Danghyang Nirartha, a Shaivite on his journey from Java to Bali, saw this beautiful outcrop and rested here. He had a feeling of divinity in this place so he asked the neighbouring fishermen to construct a temple dedicated to the Sea God. Dewa Baruna and Nirartha are worshipped in this temple now. The temple is one of the seven seas temples around the coast of Bali.

The sea temples are built in such manner that one has the view of the one next to it, thus forming a chain of temples along the shore. Climbing the Pura Tanah Lot has the view of the Clifftop of Uluwatu temple. The Tanah Lot is a much-revered place among the Balinese. The cave at the foot of the rock has the holy water where numerous devotees gather for religious rituals.

Non-Balinese visitors are also allowed to take this holy water. The priest offers Frangipani flower to every devotee. This flower is very common here and on the rock, hundreds of flowers are gathered probably to perform this religious rite. Visitors were offering some stuff nicely placed within the leaf baskets. A per the legend the rocky island is believed to be guarded by venomous snakes and the temple by a giant snake that originated from the scarf of Nirartha.

To keep this legend alive or as a means of livelihood, many were seen displaying their giant pets to arouse the religious reverence. Visitors were seen taking photos holding the snakes. To prevent the fear among the people its mouth was taped. I felt sad for these innocent creatures. Humans can turn out anything into a business.

Tanah Lot being a favourite tourist destination is quite a hub. The surrounding area is highly commercialised with markets having fixed shops to moving vendors. On either side of the lane to reach the sea temple one can find shops selling souvenirs, clothes, fruits and other eatables. Eager tourists visit these shops out of inquisitiveness to find something appealing to carry back to their country or home.

The sunset time is the busiest time of the day. The temple known as the sunset temple attracts tourist mostly at this time. Numerous tourist vehicles were seen to unload their passengers. As our stay was near we walked down the crowded lane to the sea. Low tides are a good time to get to the temple. Although non-Balinese visitors are not allowed within the temple.

The Balinese people are known to be very religious and every other day there are some religious occasions. And I presume it was one of such day. A huge group of local devotees dressed in traditional attire carrying offerings in the basket on their head. Immediately they became the centre of attraction for the tourists as the cloudy sky veiled the otherwise beautiful sunset set amidst such stunning location.

The individual group or the different groups (which I could not make out) of devotees became the subject of photography. Men and women in the bright yellow sarongs and white shirts were looking pretty. Devotees of all age were in the procession to climb to the top of the temple. I was so eager to watch the ceremony but could not.

The Tanah Lot beach is a happening place. Little kids were seen playing in the puddles of sea water, honeymooners were seen to capture their memorable kiss with the backdrop of the setting sun, locals engaged in amateur fishing along with their kids. The beautiful Pan Pacific Nirwana resort nearby with is sprawling golf course grabs overlooked the Pura Tanah Lot. Some enthusiastic kite flier were flying kites of various shapes from some place beyond sight. While on the beach the kite seller was selling his ship with the sails. Although his ship sailed in the sky rather than venturing into the seas. All these activities were getting captured through a drone moving to and fro along the shoreline.

The Pura Batu Bolong is another temple situated on a nearby outcrop jutting into the sea. This rock has a hole in it and so the name (Batu Bolong is a rock with a hole). The waves crash on the rocks and then silently retreats. This opening in the rock is thus getting shaped continuously by the waves. And it provides an intriguing character to the spot.

Thus I had the taste of Bali while exploring Tanah Lot. I felt the serenity even within this place bustling with activity. The vast sea and the fascinating natural rocky outgrowths have the power to soothe and calm. I can sit there for hours for days watching the waves crashing on the rocks. A feeling of peace prevailed while I was set to discover the rest of Bali.

Bali at a glance, with travel information.

2 thoughts on “Tanah Lot the Land in the Sea”