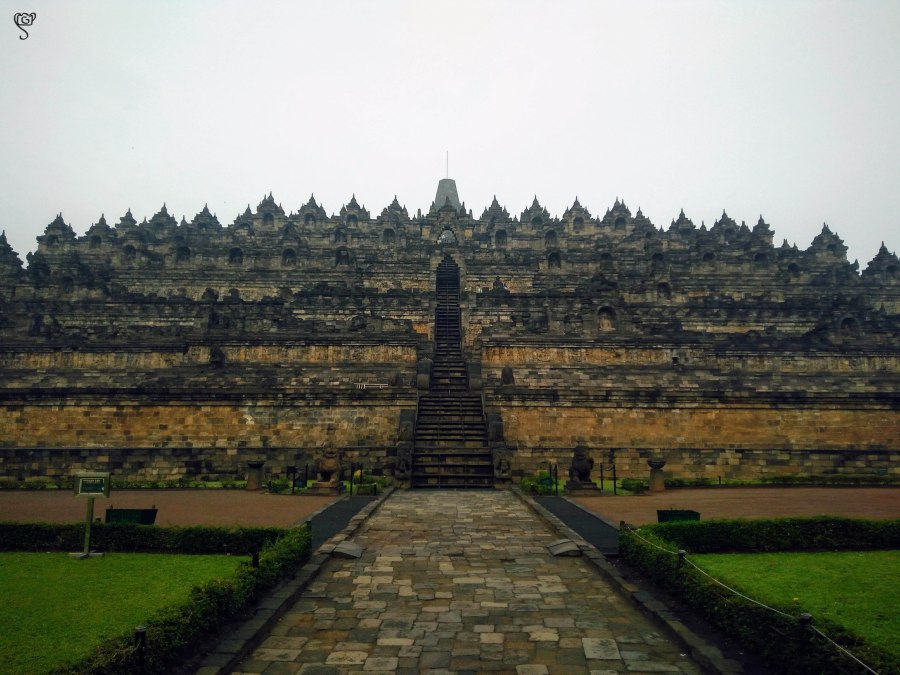 Borobudur temple was a familiar name since childhood. This renowned monument is a shrine dedicated to Lord Buddha and is a holy site, a pilgrimage for devotees. To others, it is a magnificent work of art. The layout and the design are unique. This massive structure naturally creates the interest and people get drawn to it. Some for research and educational purpose, some for a religious purpose, some to quench their thirst to explore this amazing monument, some to capture the grandeur within their camera frames and some as a tourist adding a spectacular spot to their travel list.

Since I learned in the History lessons that the Borobudur temple is the largest Buddhist temple in the world I had a hidden wish deep in my heart to visit this place one in my lifetime. I even thought of comparing the architectural aspect of the monument with the pictures in our textbook.

Sadly, I do not remember any details of the pictures now, only a blurry outline of the dull and flat looking images just like any other image from the monotonous textbook. Those blurry images have been overridden by the brilliant photographs from various websites and magazines.

So when the childhood image had already faded there is no question of comparison. In fact, at my present state of mind, I was not that much inclined to the architectural details and intricacies. I was rather much interested to explore the new destination – the famous monument, the UNESCO World Heritage Site, the mighty structure resplendent in photographer’s album, the largest Buddhist Temple and the destination that was in my mind since I was in school.

We were in Jogjakarta just because of Borobudur, while the others came as an accompaniment to it. We were doing a lot of research for the perfect time to visit this majestic monument. Ultimately we decided upon the sunrise time. We wanted to make our visit to Borobudur even more memorable by witnessing the sunrise from there and the temple in the soft light of the sun.

We stayed at the heart of the city at Jogjakarta. Borobudur is at a distance of one and half hours of drive from Jogja. With not much traffic the early morning time will take us an hour to reach there. To be there before the time we had no sleep at night as we had to get ready and start at 3 in the morning or midnight whatever you call it.

The sunrise tour of Borobudur is organised by Manohara Resort located in the vicinity of the temple. Our car parked outside the Manohara restaurant we entered the resort premises and walked to the lobby to get our tickets. The tickets for the sunrise tour for foreign tourist were priced at Rp 450,000. Along with each ticket, we were offered a flashlight, a sticker to stick on a visible area of our dress and a printed map to reach and exit the Borobudur temple.

We were said that a complimentary coffee and snack and a souvenir was included in the price of the ticket. Once we come back to the hotel after watching the sunrise from the temple and return the flashlight we will be handed over the souvenir and guided towards the restaurant of the Manohara resort.

I was pitch dark after we moved out of the hotel compound. The flashlight guided us to the temple. Though not ours but of those who were much ahead of us. The flashlights moved like glowworm guiding us the road. Then there was a massive structure in front of us and it seemed we are entering the unknown through the stairs even darker.

The steps were high and in the dark, I kept on climbing the straight, long and steep stairs to stop when I reached the topmost platform. Numerous visitors were already there. Photographers had already taken their favourite spots facing the east. While others too kept the eastern part of the platform crowded.

The sky didn’t seem to be very happy. On our drive from Yogyakarta, we did see some scattered lightning. Since then we had almost no hope of the much-expected sunrise. As the sky was gradually lighting up with patches of clouds around. I took the opportunity to explore the other side of the monument in a crowd-free way.

It is said that the Borobudur temple has been constructed around a small hill. Covering a vast area it is situated in the lush surrounding overlooking the mighty Merapi and other hills. The sky was painted red and the last hope of a proper sunrise was gone. This was the time to traverse through the temple. Devotees generally walk around clockwise starting from the base. Standing on the broadest base, it has six squarish terraces followed by three circular platforms, gently tapering upwards to the topmost central stupa.

The temple consists of 504 statues of Buddha and 2672 carved reliefs panels. The panels depict the stories from the early life of Buddha and his teachings. There are 72 bell-shaped, latticed stupas on the upper platforms. Each contains the statues of Buddha. Most of these are headless now. I managed to slip my mobile within the perforation to click one complete statue of the Buddha in one of the stupa. There are 432 statues of Buddha located in every open chamber on the galleries of the temple.

The stupa on the lotus base

The Buddha within the latticed stupa

The aerial view of the temple looks similar to a three-dimensional tantric mandala. The topmost large central stupa signifies Nirvana. To know more about the architecture and its meaning, its history and rediscovery, read the following links from Khan Academy, Wikipedia and Lonely Planet. It is said that the temple represents the concept of cosmos in stone. The climb to the top symbolic with the humans circumambulating from the base through the day to day life to attain nirvana at the topmost level.

The massive structure of such deep concept held me spellbound. I was astonished to see the architectural marvel built hundreds of years ago. No cementing material was used in the construction but it was just through the interlocking of stones. The temple remained abandoned for ages till it was rediscovered by Thomas Stamford Raffles during the British rule in the Java Islands.

I was climbing down the monument in a trance after knowing such incredible facts and above all witnessing the majestic Borobudur temple through my own eyes. It was a feeling of satisfaction, an achievement and an attainment of a strange peace of mind. Sipping the complimentary hot Javanese coffee in the Manohara restaurant, I was wondering how the place would have been at the time of the construction. I wandered in my flights of fantasy till I emptied my cup and regained my senses to travel back from Borobudur in the real world.

Borobudur at a glance, with travel information.

2 thoughts on “The Revered Temple of Borobudur”