In this post, I share my experiences of my final days in Bhutan which I spent in Paro. Hence I will also end my subsequent posts on Bhutan series. Living in Paro for a few days, it became our second home far away from home. We started feeling a connection with the valley and its people. Aimlessly loitering on the streets and gazing at the river and the mountains became our daily routine and we were relishing an unhurried easy way of life.

We were welcomed to Bhutan by the aerial view of Paro valley, so the relationship with Paro seemed much older than any other places in Bhutan. Although we did not stop in Paro and drove straight to Thimphu still felt a connection for Paro.

So after completing all our trips to the surrounding districts, it was time to explore Paro. Paro valley has the only International Airport in Bhutan and is a major city in the nation after Thimphu. Like all other towns travelled, this city also lies by the banks of Paro Chu. The vast valley of Paro is intercepted by the swift-flowing Paro river.

The magnificent Paro Dzong is located by the river. This has been a very common occurrence signifying the importance of the rivers. All the dzongs I came across in this kingdom are constructed by the river and is connected by a wooden cantilever bridge over the waterbody. This aspect makes the Dzongs even more visually and aesthetically appealing.

While travelling through the other parts of Bhutan our guide and friend, Lakey showed me his beautiful pictures of the Paro Dzong taken at night on his iPhone 6. Those were outstanding and I was so amazed that from that day onwards I kept on nagging with my request to click this beautiful monument adorned with the lights in the night. He smilingly accepted my request and later did take me to the spot from where I could get a good picture of the Dzong at night.

Our Paro sojourn started with the warm hospitality in Lakey’s farmhouse. (Read about this in my previous post on Bhutan.) With the tourist season approaching getting good hotels in this popular tourist destination became a bit bothersome. But again Lakey came for our rescue, he took us to a new property constructed a couple of years ago which had standard rooms with all the amenities and that too within our budget.

So Hotel Khamsum was our home for the next few days. The pretty lady at the reception had a warm and welcoming smile and she took good care of us throughout our stay. On our final day in Paro, she gifted us with a souvenir as a remembrance. She was so polite and she even addressed us as the non-fussy and best guest she has taken care of.

The Paro Dzong known as the Rinpung Dzong was the cynosure of Paro situated in the centre of the valley. I always admired the dzong whenever in view and it was in view all the time when we were on the roads. The Ta Dzong situated on the top of a hill overlooking the Paro valley also provided the good aerial view of the Paro Dzong.

The Ta Dzong was built by Tenzin Drugdra, the first governor (Penlop) of Paro in the year 1649. The circular building is constructed in the form of a conch shell resembling the union of the sun and the moon with its circular and crescent shapes, which is again the symbol of victory and fame.

The Ta Dzong has been converted into the National Museum in the year 1968. The museum displays a huge collection of Thangkas, sculptures, masks, artefacts and various ancient scriptures. There is a separate section dedicated to the flora and fauna of the region along with the explanation based on geographical location. The circular building of the Ta Dzong suffered damage during an earthquake so the museum displays have been removed to the adjoining building and are opened for public till the renovation work gets over.

The museum surrounding offers a bird’s eye view of the Paro valley with the vast stretches of paddy field, the Paro International Airport, dancers preparing for the mask dance for the upcoming festival, the Rinpung Dzong, and the nearby snow-covered Himalayan ranges. It was the best place in Paro to view the valley and all the monuments.

The avifaunal section of the museum provided me with a good amount of information about the bird life in Bhutan. There was various taxidermy of birds preserved. Here I came to know the original size of the Great Hornbill and I was in complete awe of it. My eagerness to see a Great Hornbill increased even more. I also came to identify a few species of birds that I saw in course of our trip (read about by bird watching experience here). Visiting the National Museum came out to be a very fruitful and knowledgeable experience.

Driving up towards the northern part of the Paro valley we watched the mountain which we scaled to reach the iconic Taktsang monastery popularly known as the Tiger’s Nest (read about my trek to the Tiger’s Nest). With the view of the Tiger’s Nest on the other side, I was thinking what a formidable task we had accomplished and was enjoying a pride-filled moment. 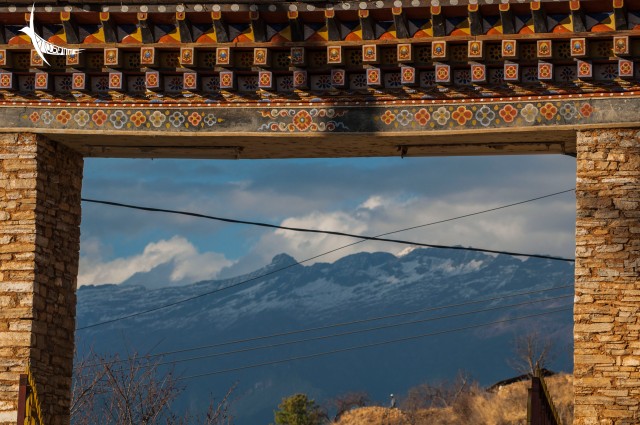 A few kilometres ahead is the Drukgyel Dzong. This ancient monument is in its ruins. The reconstruction of this fortress and dzong has started a couple of years back and is in process. Drukgyel Dzong was built on the order of Zhabdrung in the year 1649 to commemorate the victory of Bhutan against the Tibetan invasion.

The fortress was brought down to ruins by a devastating fire incident in the year 1950. The reconstruction work has started in recent years to preserve the important history associated with this place. Although this is not a popular tourist destination but is an important historical monument and is popular among the locals. We saw many locals picnicking in the surrounding areas. While some were busy in recreational games like the game of darts.

Purposeless loitering through the main road of Paro gave us a good opportunity to see the local lifestyle and livelihood. Thus on one such occasion of roaming the streets, we saw the national carriers manoeuvring at a low altitude and approaching the Paro airstrip flying just above us. I was happy to click ample of shots meanwhile. 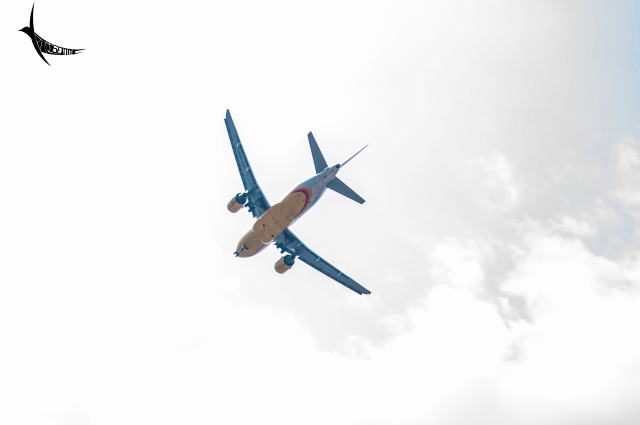 This loitering came with an added advantage of having extra time to look around the shops and markets. Keeping up the reputation of women addicted to shopping, I shopped at every occasion as we took the stroll through the roads by the shops. The handicrafts displayed in the showcases called me to carry them back home and I could not help but fall for their calls. 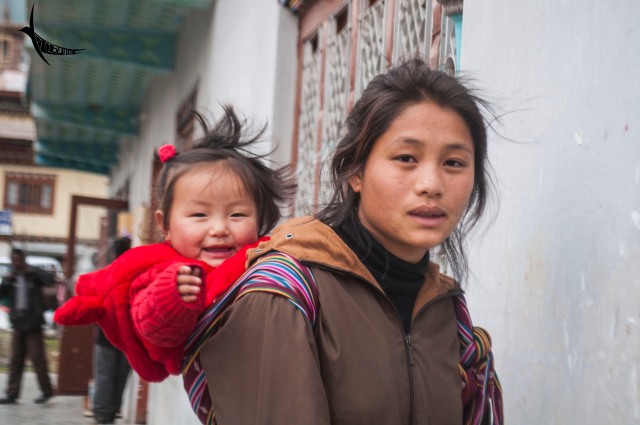 One fine weekend morning we reached the Paro weekend market. It was the local market where villager gathers to sell their farm produce and also the edible items imported from the neighbouring countries of India, Nepal and Bangladesh. Flowers, vegetables, fruits, eatables, tea, dried fish, cheese, incense, anything and everything was for sale here.

All of a sudden an elderly lady gave a broad grin with her stained teeth and offered me her sell-ables. I could not deny her sweet request and purchased a packet of puff-like snack that I have seen being offered to the Gods in the monasteries. The busy place was growing busier. In the meantime the saleswomen were finishing off their breakfast, some were in deep conversation and some were taking a quick nap when they had no customers.

After all the hustle bustle in the market, we went to the Archery ground to watch the Archery match that is held almost every day. The beautiful archery ground is located beside three stupas build in a line by the side of the road and the road is lined by willows on either side. It is mandatory for the locals to dress in traditional attire to participate in the archery match.

Participants of both teams stood on either side of the targets. As any of the archers hit the bull’s eye his team performs a traditional song and dance to rejoice at the moment and a scarf is added to his waist. I was unable to see the target situated so far and was wondering how these archers are hitting the target.

One after the other the skilful archers were taking the arrow fixing it on their compound bow and aiming for the target and then… shhhhooooow. The arrow has hit the target. I could not even see the arrow mid-air and it went and hit the target followed by the ritualistic short song and dance. The scoreboard was showing the scores and both the teams were performing pretty well.

A helicopter hovering above the ground caught my attention. In Bhutan, I got ample of scope to click these flying objects – be it an aeroplane or a helicopter. So again I did my due diligence. 🙂 Archery and flying object gazing, both seemed to be engaging sport to me as a spectator.

On our final day in Paro, Lakey took us to a sacred temple on the top of a hill in a small village named Pangbisa. It was an exceptional short journey through an excellent road with stunning views followed by the roadside picnic. The monastery and the village has a lot of legends associated with it so I thought to dedicate a post only for Ugyen Guru Lhakhang. Stay tuned for my next post on Ugyen Guru Lhakhang.

Thus our days in Bhutan and Paro was over and next day was supposed to return back to our country. Lakey kept his promise to show us the night view of the Rinpung Dzong. He took us to the spot from where I could take night pictures of the Paro Dzong along with the Ta Dzong on the top of the hill. Bhutan trip was like a wish-fulfilling trip to me and with a final post to come I end my series here.

Paro at a glance, with travel information.

11 thoughts on “Popular and Picturesque Paro”