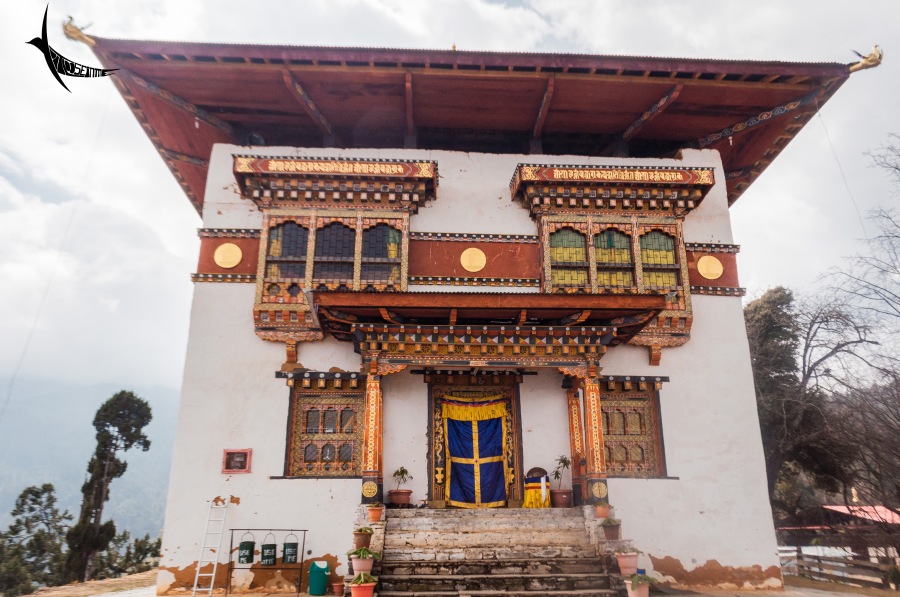 The sacred tale of Ugyen Guru Lhakhang and the adventures of the people of Pangbisa is no less than a fairy tale revolving around miracles, faith, prophecy, treasures, mummified body, severed head and a lot more. This mystical story is based on the tiny village of Pangbisa situated close to Paro valley in Bhutan. Perched on the cliff within this green hamlet is the ancient temple, the Ugyen Guru Lhakhang. The temple is associated with many such legends and divine commands followed till date. Not known to many, Pangbisa with the Lhakhang is one of the hidden treasure in Bhutan.

The small village of Pangbisa is located at a distance of about 20-25 kilometres from Paro, Bhutan. A less travelled, broad and paved road leads to this idyllic hill. The road meanders through the ascend to offer breathtaking views at every turn. The Paro valley with the picturesque airport, the artery road running parallel to the Paro Chhu (Paro river) and the vast stretch of empty farmlands were in view for a long. These farmlands will get a fresh coat of green form the paddy seedlings during the summer. While nestled within the forested slopes are a few traditional houses along with their adjoining farms. Bright sunny days assures the panoramic view of the snow-capped Himalayan ranges. The forest thickens as the path diverts to the gravel road. It is a narrow road ascending through the mixed coniferous forest to reach the summit. A few more steps lead to the holy destination – the Ugyen Guru Lhakhang.

Strong howling winds followed by a short span of light snowfall marked the auspicious beginning of our religious visit, as per our guide. A simple ancient building with the basic traditional structure stands on the top of the cliff with the bird’s eye view of the surrounding. There is a tiny, placid lake on one side which is also regarded as sacred. The mighty hills around seemed dwarfed from this site. The temple is home to ancient relics and treasures, and treasures unfold the legend behind this temple. The temple is dedicated to Guru Padmasambhava with the other names like Guru Rinpoche and Ugyen Guru. He introduced Buddhism in Bhutan in the 8th century and is thus regarded as the second Buddha.

A resident monk was kind enough to narrate the mystical interrelated long story of the Lhakhang, Pangbisa and its people which was then translated by our guide. As the legend goes, a Buddhist Lama named Tenzin Zangpo started sculpting the statue of Ugyen Guru to be seated on a sacred slab of stone in this temple. He carved the body but could not shape the head of the statue. Days and months passed without any fruitful result of his efforts. This is when two angelic ladies appeared at the door. They offered him the pre sculpted head of the statue. Overjoyed by this unexpected event he ran inside to assess if it suits the body of the statue. To his astonishment, he found the head immediately getting attached to the body. He was elated to see the complete statue. He went out to express his gratitude to the ladies for their valuable gift to see that they were long gone.

Later it was found that the ladies were the consort of Guru Padmasambhava himself. As per the local practice to instil life within a statue some holy relic is engraved on the statue. In such an attempt to engrave, the statue spoke out. He said that no inscription is required. He ordered to leave the statue as is. This statue of Ugyen Guru is the presiding deity of the temple and is also known as the speaking God. The statue is seated on the holy slab on which Terton Sherab Mebar meditated years ago. Here goes another legend of this famous treasure revealer. Terton Sherab Mebar was born as Migyur Dorje in Kham, Tibet. He was believed to be the reincarnation of Katok Lama (Katok is a significant Nyingma monastery in Derge, the oldest of the four major schools of Tibetan Buddhism), Wangdrak Gyatso. He was the first known treasure revealer in Bhutan.

Treasure revealer were spiritual leaders with supernatural powers destined to reveal physical and divine treasures. Divine treasures were holy scriptures, liturgies and visions or commands that were received through dreams or in the state of trance. Migyur Dorje, who earned the name of Terton Sherab Mebar, was prophesied to discover many such treasures and live for ages. He travelled across Tibet in quest of treasure and thus through many adventures and misadventures, he reached his ultimate destination of Pangbisa. Throughout his short lifespan he was known to discover many treasures. Along with physical treasures, there were numerous spiritual treasures. Karma Chakme, a monk and his disciple wrote all his visions as dictated by the Terton which are preserved in this temple as holy scriptures.

On one such divine prediction, the Terton was foretold to visit a lake called Nub Tshona Patra in the district of Haa seven times and bring back innumerable treasures. He took over the mission much before the destined time to embrace misfortune in his life. He along with a team of carpenters set forward for the mission to fetch the golden pillar from the bottom of the lake. With his supernatural power, he held all the water of the lake in his mouth to allow the carpenters to cut the pillar. In due course, the carpenters turned covetous seeing the huge amount of gold. They started defying the orders of the Terton. With a huge volume of water in his mouth, the Terton was unable to speak. He waved his hand to stop them. He finally had to open his mouth when his desperate attempts to communicate failed.

Water gushed out of his mouth at a huge force thus drowning all the carpenters. The enraged water of the lake then chased the Terton. With this misadventure, he lost his meditative composure and ran for life. To appease the furious waters he dropped the previously collected treasure from the lake one by one. Where ever he dropped a treasure a small amount of water settled down on it. Thus concealing the treasure and slowing down its violent speed. Finally, he was left with a cymbal among the many treasures he collected from the lake. A local deity of Haa, mediated to bring peace between the chasing water and the Terton through an agreement. He reached Pangbisa and the water finally receded. As per the agreement Terton and his people of Pangbisa shall never cross the region of Tego La towards Nub Tshona Patra and people from Haa shall never step in Pangbisa. Elderly people of the region are known to abide by this agreement till date.

The Terton was known for his restless nature due to which he disobeyed many divine predictions and set forward for adventures much before the destined time. Thus to welcome ill fate and misadventures ultimately leading to an untimely death in his thirties. There is another mystical tale that goes around his death and his mummified body. After some time of the failed mission in Nub Tshona Patra, he attended an event in Baylangdra, Wangue. He had an evil omen of death before going thus he instructed his disciples to bring back his body to Pangbisa on circumstances of his death. As foreseen, he died in that event. His people reached Wangdue to claim his body as per his wish. The people of Baylangdra village denied, sighting the reason that Terton wanted to die here so his body shall rest here. A temple was built and his preserved body was rested within it. Since then his disciples kept a watch on the temple with the body. On one fateful day of harvesting festival, when all the village men were busy, they stole the body to bring it back to their village.

Ages later the governor of Paro, Tshulthrim Namgyel urged the people of Pangbisa to hand over the sacred body to the government for better preservation in Rinpung Dzong in Paro. The villagers unwillingly agreed with the hidden motive to steal back their village’s property. They patiently held up to execute their plan until the perfect time and opportunity. Meanwhile, they devised a proper plan and built a clay body to replace it with the body of the Terton. The mummified body of Terton was preserved within a box in the underground chamber of the Dzong. On a favourable day, they stealthily entered the Dzong with the clay body. They removed few wooden planks on the floor of the chamber below which the body rested. They found the box preserving the body larger than the opening that they made. They broke open the box to bring out the body which was again bigger than the gap. When all their plans failed they decided to carry something back and thus severed the head from the body. The clay head acted as the replacement and the box was sealed and returned back to its original position. Since then the sacred head relic lies safely within the sealed chest in the Lhakhang in Pangbisa.

Every year on an auspicious day the head relic along with other treasures are laid open for the public display. A treasure in the form of a stone mongoose is on display all through the year and is placed near the statue of Ugyen Guru. The mongoose was believed to be live when it was brought in by Terton as a treasure from some lake which gradually turned in a stone. They say the body of the mongoose used to seep out holy water for few years. I was overwhelmed by such interrelated story revolving around the unknown, tiny town of Pangbisa. All thanks to our guide Lakey Drakpa who planned for this spiritual journey on an extra day in Bhutan. With folded hands, he said – “all wishes of the devotees are fulfilled here.” With a wishful thought of well being of all, we left behind the sacred town of Pangbisa with an extraordinary story from the past.

Paro at a glance, with travel information.

6 thoughts on “Tale of Ugyen Guru Lhakhang in Pangbisa”