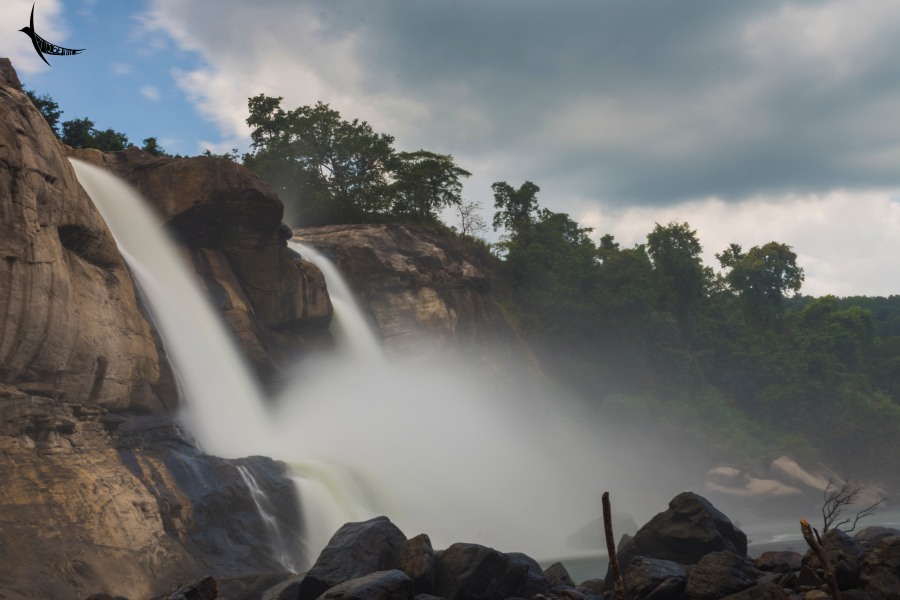 Any flowing water body which encounters a vertical drop or a series of drops is known as a waterfall. This sudden drop in course of its flow adds a rustic charm to the view. It has an aesthetic beauty that arouses every sense – the scene is pleasing to the eyes, the sound of the gushing water plays music to the ears, the plunge spreads an earthy smell of freshness, the sweet water quenches thirst and the mist around the plunge soothes the body and soul. Here I write about one such beautiful and famous waterfall that has also been the backdrop of many movie sequences – the Athirappilly Waterfalls. 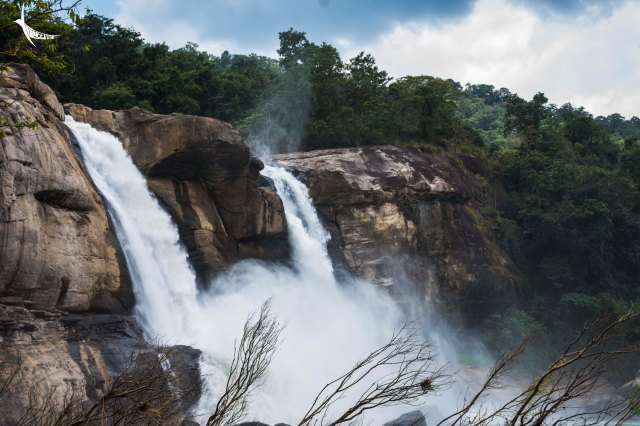 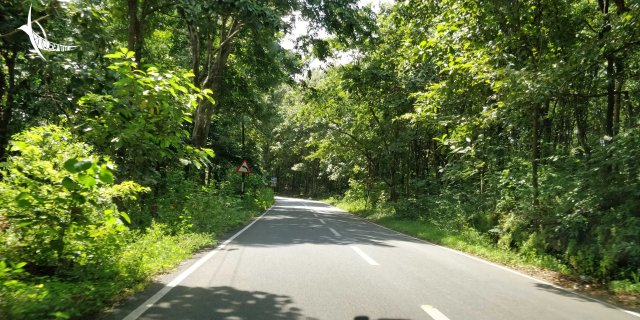 The Chalakudy river originating from the upper Sholayar region of the Western Ghats, along with other major tributaries flows through Palakkad, Thrissur and Ernakulam district. In its course within the Vazhachal forest region, it experiences a drop of 80 feet to form the mighty Athirappilly Waterfalls.

This fall is often nicknamed as ‘The Niagara of India’. The gentle river turning rough entering the Vazhachal region takes the plunge from the rocky region in three thick streams to form a big plunge pool and ultimately flow downstream towards the Arabian Sea. 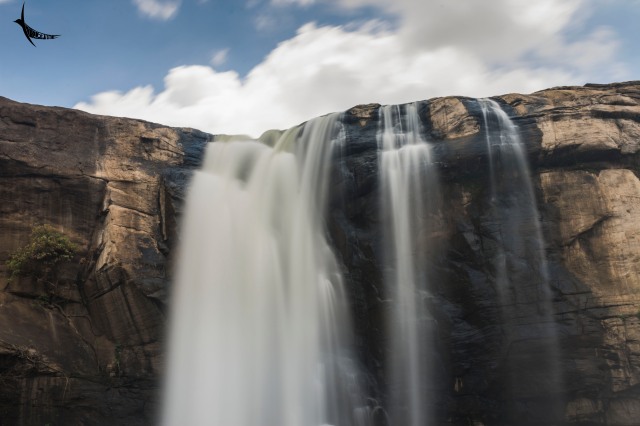 With much excitement to see the Indian Niagara, I was there a few years back. This time it was for the Neelakurinji that I visited Kerala (read my post on Neelakurinji), so why not see the falls after the floods. Thus with much hope, I started for Athirappilly Waterfalls again. 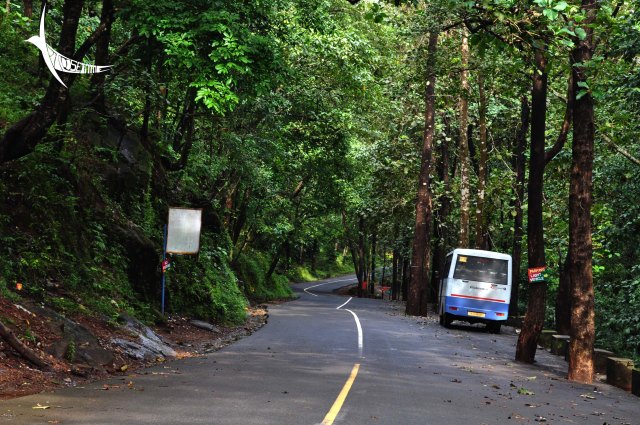 Time bring great changes in all and these few years did the same to Kerala. Being on the same roads after so many years did not bring the same expected feeling. Back then, the road was through the forested village with scattered Bungalows and houses frequented by attractive chapels and church buildings.

This time it was comparatively a busy town with more Bungalows and less of the forest. As we were approaching closer to our destination something different grabbed my attention. Immediately the Nerolac Excel ad that was telecast on the television a few years back came to my mind. It showed that those who do not apply Nerolac Excel Paints on their house they have to do something to prevent their house from the damage caused by the rain, so a huge umbrella over the house.

Now, what on Earth made me recollect an ad film pretty old? I saw many beautiful bungalows with an umbrella-like shade on the top spread across the length and breadth of the house, quite visible to shield the house from the scorching sun and the heavy rains of this region. This was definitely a surprising view with every house having a huge shade above its roof standing on four pillars around the building.

I realised that the idea of the umbrella ad film must have been conceptualised from this region. It is not a good etiquette to click any house without the resident’s permission but I could not stop myself and stealthily managed a snap of a bungalow with an umbrella (shade). This was an interestingly new thing for me. I do not know whether a Nerolac Excel paint protects the house from rain and sun or not but this huge shades definitely does.

The church buildings stood equally attractive and I presume a few new churches came up in this span. They too had beautiful architecture. There was a vast area of palm plantation and a few patches of rubber plantation which I do not remember was there or not before. But the curves through the forest area remained the same.

From the entrance gate of the waterfalls, it was a no plastic zone and we had to deposit our plastic water bottles before entering. The slope down towards the falls was just like it was before with more visitors accompanying us the descend down the uneven rocky path to the plunge pool of the waterfalls from where we get the complete view of the drop.

Similar plastic water bottles that the visitors deposited at the entrance were sold in the store operated by the forest department near the falls. I wondered what if visitors discard those bottles anywhere within the premises? The thoughts lingered on my mind when a macaque playing with a carry bag disposed of by some careless visitor grabbed my attention. We call ourselves civilised animals and this is what we do. We just remained animal never to be civilised. 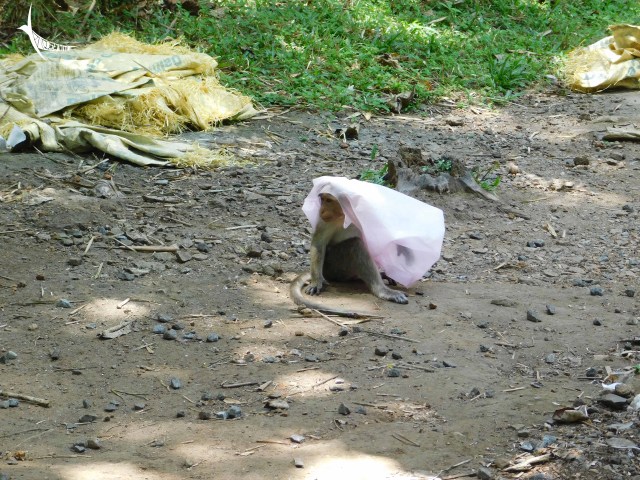 As we climbed down the slope, I was shocked to see an unexpected scene. The surrounding area which used to be lush and green is now dry, barren with a dirt track leading to the plunge separated by large boulders. Beyond the boulders, there was rope fencing to mark the restricted area.

This boundary line was marked to keep the visitors at a safe distance from the water body. Entering into the water was restricted and was clearly mentioned in a board. All the green shrubs, bushes and small trees near has transformed into dry dead branches. The sight seemed depressing. 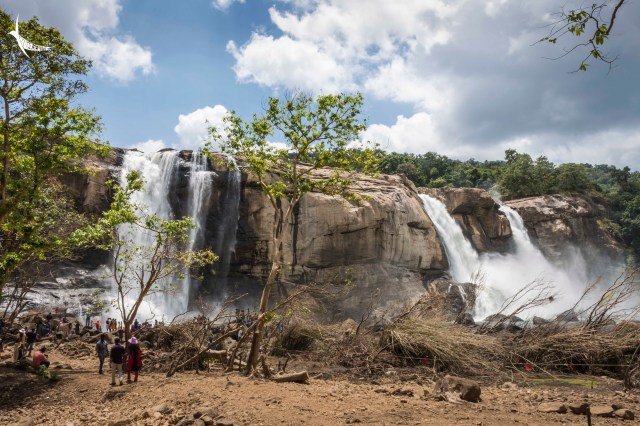 The much expected thick streams of plunge too were not seen, it was even narrower than that seen before. A huge number of visitors gathered at the nearest permissible spot of the plunge pool to grab the perfect picture in front of the waterfalls and feel the mist that filled the air.

Even though disheartened at first the misty air touching my face delighted me. It seemed to welcome me back again. Forgetting all my woes about this place I began enjoying what it is now rather than reflecting on how I have seen it before.

After some time and a few shots of the surrounding, we climbed back to the mouth of the falls. Here the river flows on a flatbed to encounter the drop in the topography thus taking a plunge to form the once mighty Athirappilly Waterfalls.

I tried to visit the Charpa and the Vazhachal waterfalls too that are very close to Athirappilly waterfalls but were disappointed to know that the flood has damaged the road onwards and no vehicle or humans are allowed beyond a certain point.

Time, human interference, natural calamities and other environmental factors might have worked to bring changes in the present scene of the Athirappilly Waterfall but still, it remains equally pleasing and attractive. Comparing the past and the scene brings a question to my mind. What has brought the changes? Of the various reasons that might have worked to transform the landscape, I find the only culprit that are the Humans.

Athirappilly at a glance, with travel information.