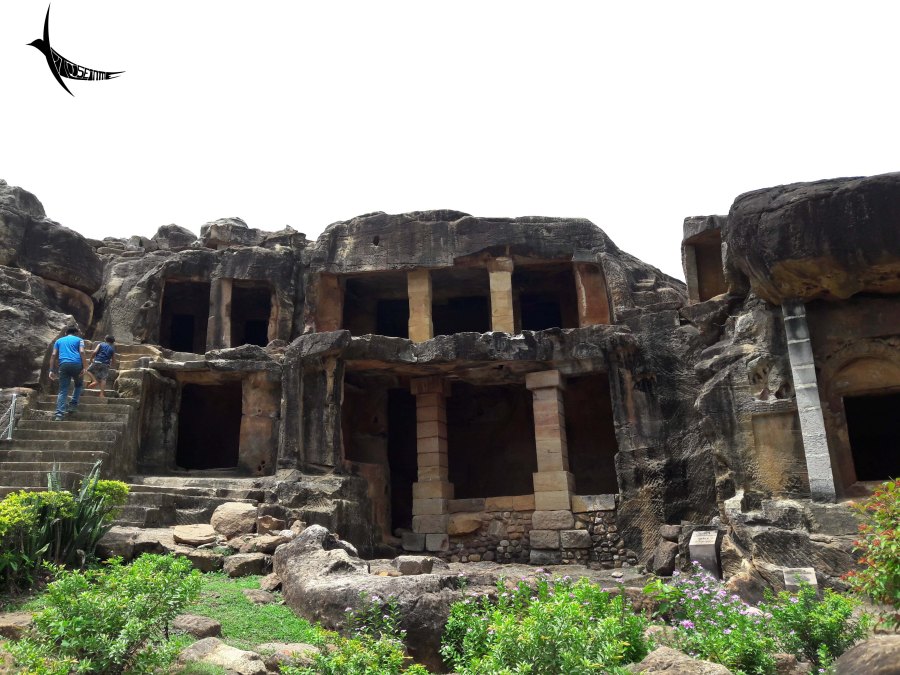 Bhubaneswar, the capital city of Odisha is also popular as a temple city with its vicinity to Puri and Konarak (forming the Golden Triangle or the “Swarna Tribhuja”) and itself being the site for some ancient temples. Bhubaneswar replaced Cuttack as the capital of the state after a couple of years since Indian independence. With a history dating back to the 3rd century, the modern planned city is comparatively new. With the old and the new Bhubaneswar is a delightful place to visit.

Cuttack, often known as the twin of Bhubaneswar used to be the previous capital of the state and the ancient dynasty of the Khesari rulers. With a rich history and being the birthplace of many eminent personalities, Cuttack has a major contribution to the formation of modern Odisha.

Located very close to each other these twin cities has a lot to explore. With little time in hand, I wanted to touch as many places as possible with a hope to be there again to rediscover them at peace without any time limitation. Today I will swiftly take my readers through Bhubaneswar and its surrounding in a touristy way, just like the way I did.

When you are in Bhubaneswar the first thing that comes to mind is the Lingaraja temple. This ancient temple with the typical Kalinga architecture was supposedly built by the Somvamshi dynasty with Lord Shiva as its presiding deity. The large temple compound has many other temples within its enclosure.

The Lingaraja temple is maintained by the Archeological Survey of India and the temple trust. This is an active temple with regular devotees and worship of the deity. This is an old area of Bhubaneshwar and there are a few ancient temples like Papnashini temple, Chitrakarini temple and others scattered around. These temples are also maintained by the ASI but are not functioning like the Lingaraja temple.

The Mukteshwara Temple is another major attraction with its beautiful architecture. The Torana or the porch has the influence of Buddhist architecture and is built in an intricate style having an aesthetic appeal. Bhubaneshwar has seen the influence of various religion and its signs are engraved in the history of the city. These ancient structures stand to narrate the tale of Hinduism, Buddhism and Jainism in this city.

The Khandagiri hills are famous for the 18th century Jain temple dedicated to Rishabhnath. The present white temple structure is believed to be a new shrine built on the site of the previous temple. There are 15 caves in Khandagiri. Being within the city area Khandagiri and Udayagiri caves are a popular tourist destination. Along with the historical significance, it also serves as a nearby place to go for a day trip and is visited by the locals as well as other tourists.

With Khandagiri hills on the left, the Udayagiri caves are on the right. Udayagiri caves are in better condition than the Khandagiri Caves. Udayagiri has a total number of 18 caves among which the Haathigumpha (cave 14), Ganeshagumpha (cave 10) and the Ranigumpha (cave 1) are most famous and are immensely carved. These caves were the residential chambers for the Jain ascetics. The combination of these natural and rock-cut caves was excavated in the 1st century BC by Kharavela and his successors and continued till the Samavamsis.

The Dhauli hills is again a significant place attached to the Buddhist religion. Dhauli hill has the major Edicts of Ashoka on a mass of rock. The Dhauli hill is assumed to be the site of the great Kalinga war. A rock-cut elephant is engraved above the edicts on the side of the road leading to the top of the hill and is the first Buddhist sculpture in the state. After renouncing the path of violence Ashoka built many stupas, chaityas and pillars in Dhauli and other places. The Viswa Shanti Stupa or the peace pagoda on the summit of the hill is a popular tourist destination now and is synonymous to Dhauli.

The UNESCO world heritage site of Konarak Sun temple is situated at a little distance from Bhubaneshwar. The temple was famous as black pagoda to the European sailors as the large temple tower appeared black from the sea. This Hindu temple dedicated to the Sun God was built by Narsingha Deva of the Eastern Ganga dynasty.

Coming back to Cuttack from the magnificent structure of the Sun temple in Konarak. The city of Cuttack again has many interesting places to visit. The Barabati fort built by the Ganga dynasty is in the state of ruins. What remained from the nine-storied structure is the moat, gate and the earthen mounds. The Barabati stadium lies adjacent to the fort and the Katak Chandi temple is also in the vicinity.

In a short time, it was like a ‘move around Cuttak’ trip for me. I was interested in visiting the Netaji museum which was the residence and the birthplace of the defiant patriotic hero of India, Netaji Subash Chandra Bose. His ancestral house named after his father as Janakinath Bhawan was later converted into a museum by the Odisha government. The great national hero was born here on the 23rd of January 1897.

The museum has rare collections of memorabilia, artefacts and photographs, Netaji’s INA uniform and a collection of his letters from the prison expressing his strong view on independent India. The museum also displays some items used by the leader and also throws light upon the spiritual side of his character not known to many.

The museum is well maintained will well-manicured lawn and garden in the outer side. The walls have beautiful graffiti depicting scenes from his life. There is a replica of the horse carriage that was used by Netaji during his lifetime. The sculpture of the great leader adorns the entrance. There are road signs leading to the Netaji museum from the main road and this helps in avoiding any wrong route in the busy streets of Cuttack.

Coming to the banks of the Mahanadi river the beautiful road with the greenery pleases the soul. A large fairground by the river is adorned by a beautifully made recent permanent structure known as the ‘Welcome arch for Baluyatra’. ‘Bali yatra’ (or ‘Baluyatra’) is an annual festival commemorating the voyage of Odiya mariners to the distant lands (to Bali, Java, other islands of Indonesia and Sri Lanka) for trade. The Baluyatra fair is held every year with much fanfare starting on the day of ‘Kartik Purnima’ of Odiya calendar.

The Odisha State Maritime Museum is located on the other side of the road. This was the site of the maritime engineering workshop during the colonial era. The British converted it into a maritime museum with 13 galleries. The museum displays various vessels, boats and other accessories used by the Mariners during the ancient times. Then moving to the final part of the journey a glance of the Jobra Barrage on the Mahanadi made a sweet ending to my Bhubaneshwar and Cuttack trip. With a hope to be back again with more time in hand, I bid farewell to the twin cities.

Bhubaneswar and Cuttack with travel information.

9 thoughts on “Bhubaneswar and Surrounding”

Happy Makar Sankranti to all... 1. Some sweetmeats from my kitchen on this auspicious occassion. 2. Pongal celebration in Chennai... শুভ মকরসংক্রান্তি இனிய பொங்கல் #happymakarsankranti #happypongal #happybhogalibihu #festival #indianfestival #occassion #hindufestival #festivalofharvest #harvestseason #food #celebration #footlooseinme
Some fresh vegetables from my kitchen garden... On this winter morning sending you the basic ingredients now get your own onion and make your own bharta..😜 #fresh #freshvegetables #kitchengarden #brinjal #eggplant #tomato #chilli #baingabkabharta #vegetables #vegan #crop #farming #aubergine #myfirstbrinjal #happy #happyfarmer #beautiful #farm #garden #footlooseinme
Wish you all a Happy, Prosperous and Blissful New Year! Let this New Year be the beginning of new hope where all our hearts be filled with love, where we learn to show empathy, where we learn to respect others, where we learn to give, where we learn to spread happiness, where we become compassionate, soaring above the negativity, the selfism, the mad rush of running for excellence. If we can achieve this we can excel as humans and prove to be the best animal and this will truly be a wonderful world. #happynewyear #newyear #happynewyear2020 #newyearwishes #newyearthoughts #wishfulthoughts #whitebelliedseaeagle #birdofprey #soarhigh #eagle #newyear2020 #happy #bird #birdphotography #happy2020 #footlooseinme
As last Sun of this year takes the dip for the final time it leaves behind its reflection. So does this year leaves behind loads of memories - good and bad. Let's not evaluate the good and the bad like profit and loss in the measuring scale rather look back and think on our deeds. What have we done this year to become a better person than what we were the previous year? Just a single thought can bring out a great change in ourselves and in turn in our society and thus the whole world. Bye-bye 2019. #yearend #2019 #31stdecember #sunset #whishfulthoughts #thoughtfullness #waves #reflection #instayearend #instagood #picoftheday #nature #love #beautiful #lonelyplanetindia #natgeoyourshot #footlooseinme
A tiny beach in Northern Ireland and also the filming location of a scene of GOT, stay tuned to my blog for the upcoming post. #northernireland #countyantrim #beautiful #blue #sea #beach #bluesea #gameofthrones #scene #scenery #travel #travelblog #travelling #island #footlooseinme
Merry Christmas #merrychristmas #happychristmas #christmas #christmas2019 #christmascelebrations #santaclause #kids #seasonsgreetings #christmasgreetings #santaclauseintown #birthofjesus #jesusbirthday#footlooseinme
%d bloggers like this: