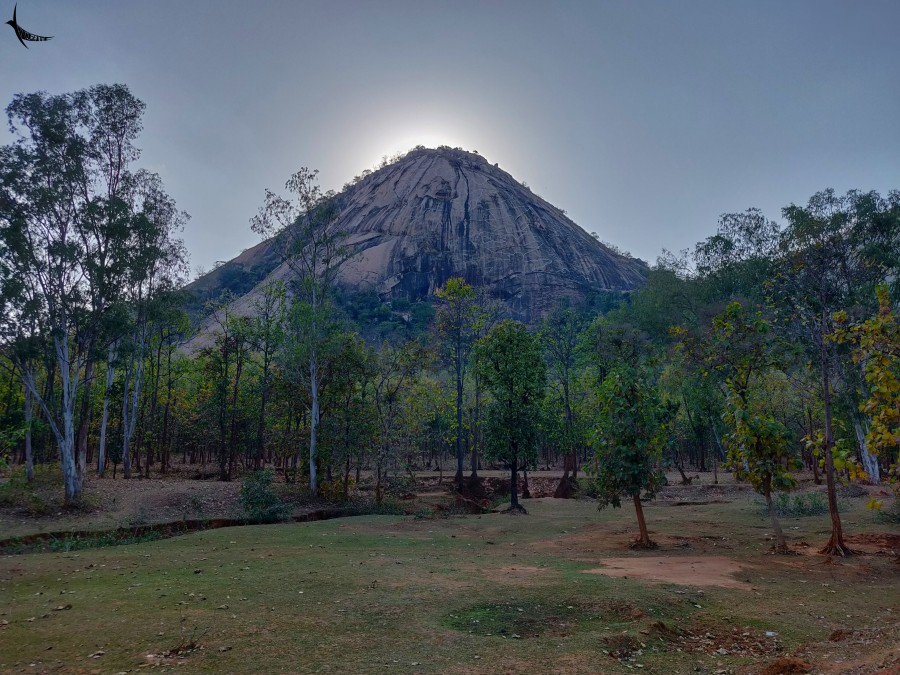 Ajodhya Pahar or the Ajodhya Hills is a small plateau surrounded by the Dalma Hills, an extended part of the Eastern Ghats in Purulia district of West Bengal. No, don’t be mistaken by the name of Ajodhya that sounds similar to Ayodhya, a city in the present day Faizabad district of Uttar Pradesh and mythologically famed to be the birthplace of Rama from the epic Ramayana. Our Ajodhya too has a link with the story of Ramayana but nothing to do with its famous namesake of Ayodhya. This is a small forested region nestled within the breathtaking view of hill ranges and inhabited by hardworking tribal communities.

The peaceful hamlet known to be the lowest step of the Chota Nagpur Plateau used to be a safe haven for the Maoist even a few years back. Due to the Naxalite activities tourism as well as the development of this region suffered a major setback. There were frequent killing and explosions of land mines which deterred the tourists from visiting this beautiful destination which is not so far from the capital city of Kolkata.

With the change in the governance, the Maoist activities gradually lessened to ultimately diminish making way for the tourists to visit Ajodhya Pahar which is blessed with bountiful of natural wonders. With peace prevailing in the area, the residents are hopeful to see a better tomorrow. Development is taking place at a slower pace but the situation has been improving and there is positivity among people letting go all their past resentments.

Ajodhya Pahar is a gem of a place with lush forest cover, numerous waterfalls and water bodies (natural and artificial), small hills and plateaus and the beautiful tribal people and their simple painted mud huts in the quiet villages. Coming back to its mythological connection with the Ramayana, it is believed that Rama, Sita and Lakshmana stayed here during their exile.

There is an associated legend that when Sita was thirsty, Rama pierced the earth with his arrow and water came jutting out of the hole and Sita quenched her thirst from this water. This underground stream is now known as Sita Kund and is one of the major tourist destinations in Ajodhya Pahar. There is a Ram temple near the site. Local tribals offer puja before they venture for the annual hunting festival in the month of Baisakh of the Hindu calendar.

The lush forested Ajodhya hills is a favourite winter weekend destination for tourists around West Bengal. There are several dams and reservoirs snuggled within the green surrounding which again serves as the favourite picnic spots for the locals. The hills and the rocky outcrops provide the ideal spot for beginners to learn mountaineering and rock climbing. While the adventures enthusiasts love to trek their way up through the forest trails to reach the table top mountain.

The undulating topography of the land is a form of blessing which helps in the interconnection of many seasonal streams to finally meet the Kangsabati, Subarnarekha and Kumari river downstream. These natural landscapes also open up the opportunity for humans to harness the natural resources for the benefit of the people and thus many hydropower plants and dams are seen across the Ajodhya Pahar area.

The PPSP is one such project under the WBSEDCL. PPSP stands for Purulia Pumped Storage Project, which is the first 900MW pumped storage project running successfully in India. This is a hydroelectricity generating project using the concept of pumped storage. In this process, there are reservoirs at different levels. In this method water is pumped from the lower elevation reservoir to a higher elevation and energy is stored in the form of gravitational potential energy.

When there is the low energy demand the excess electricity is used to pump the water to the reservoir in the higher level and when the demand increases the water is released through turbines to the lower reservoir, generating electricity. This is a cost-effective, lossless, faster way of generating electricity where smaller reservoirs are needed as compared to the conventional hydroelectric power dams of similar power capacity.

Even if this is the better concept in generating hydroelectricity the capital cost and the geographical conditions becomes the prime factor before setting up such projects. With the financial assistance from the Japan Bank for International Cooperation, this 900 MW project was started in May 2002 and was completed in 2007 before the scheduled completion date.

This PPSP is popularly known as Upper Dam and Lower Dam by the locals as well as the tourists. The area around the Upper Dam offers a breathtaking aerial view of the surrounding area. The adjacent area of the Upper Dam is quite a hub in this sleepy forested village surrounding. Humble food vans and moving vendors gather here to cater to the munching needs of the picnicking visitors. The PPSP dams receive the maximum number of visitors as compared to the other dams in the area.

The rock embankment in the Upper Dam is made of the rocks cut from the nearby Marble Lake. This activity of cutting rocks from the area created a crater which was gradually filled by the slow seepage of underground water turning it to the pristine blue ‘Marble lake’. This is again a popular tourist destination where tourists are even seen to take bath in the unspoilt water of the lake. Local vendors make a meagre earning by selling tidbits from their makeshift leaf-made shacks.

The other interesting natural dams around this area may not hold that much importance in terms of hydroelectricity generation or sophistication in terms of technical aspect but the scenic beauty and the surrounding locale is captivating enough to lure the city dwellers to have them included in their list of favourites. The Murguma Dam, Durgabera Dam and the Khairabera Dam are among the popular ones in the area.

Any waterbody makes a place more luscious and appealing and when a hilly area has numerous reservoirs scattered around, it naturally adds to the beauty of the place and added to these lakes Ajodhya Pahar is blessed with two famous waterfalls – the Bamni falls and the Turga falls. The multi-tier white waters rushing down, making way through the green forest in a haste to meet the lake below, this is the evergreen Bamni falls. The magical surrounding with the enchanting nature painting the scenery beautiful. But the heap of garbage around, as a result of incessant littering of the place by the visitors on a regular basis is an eyesore.

The road conditions were not so good but there was the hope of better roads tomorrow as many constructions work were in process. Pakhi Pahar is yet another attraction with its name saying Hill of the Birds. Being a bird lover I at once jumped to have the opportunity of bird watching in the so-called Bird’s Hill. My doubts were soon clarified and I was told that this was no hill for the birds but it is a high rocky outcrop which has been carved with multiple images of birds.

The story begins this way, a veteran artist name Chitta Dey came up with a troubling situation when he could not get his sheet-metal sculpture of a bird with 22 ft wingspan through the doors of the art gallery in Academy of Fine Arts Kolkata. He had to clip the wings before he could get it into the gallery when some critic commented it to be too big for the gallery space. This troubled the thought of the artist who had a different vision in mind.

Later in the year 1996, the government granted permission to him for a space big enough to accommodate many of such large birds. They offered him the 800 ft high hill in Purulia district to transform his dreams into reality. He started chiselling the rock with a little fund in his pocket which later he received a grant of Rs 3 crore from the state government realising his effort in beautifying the area, providing employment to many locals as well as increase tourism in the previously Maoist affected area.

Dey has a plan to cover the hill with hundreds of birds, presently about 65 birds have been sculpted on the rock face with the smallest being of 55 ft wingspan and the largest of 120ft. He started off with training 32 local youths from the area who were initially reluctant and doubtful about the futility of his idea of rock carving on a hill. There were many hurdles on his journey of making the hill as ‘Pakhi Pahar’. The funding, the Maoist activities and the requirement of willing manpower were the obstacles that slowed down his progress.

He gave his dreams the wings and he painted the hill and the surrounding boulders with birds of rare species and animals that are on the verge of extinction like Pangolins. He opened an Art centre named ‘Aina’ to train the locals and thus making them self-sufficient to earn their livelihood. His motivating message to the young generation is “Pursue your dreams with passion and dedication, and remember life is all about struggles.”

Purulia along with the Ajodhya Pahar belt is inhabited by various tribal communities like the Santhal, Kumhaars, Munda, Oraon, Kharia, Birharh and others. These aboriginals have their unique lifestyle and are untouched by the modernisation of the outside world. They used to live in extreme poverty, illiteracy, ill-health and poor hygienic conditions. With the soil not so fertile, farming was not the option to grow food and forest became the only source of livelihood. Purulia was marked as one of the most backward districts in our country. With such despair prevailing among people the Maoist activities gained a stronghold in the area.

In recent years with increased Government initiatives, effort from Non-Government Organisations and individual leadership (like that of Chitta Dey’s) and funds from various sources has opened up the process of development in the area. Basic education, health-care and hygiene factors and employment issues are being looked after. New roads are being constructed, hospitals, health-care units, schools and colleges are being made. Women empowerment are also being looked after. With such positive developments all around, the tribals are hoping for a better tomorrow and visitors hoping to see a beautiful place with its happy dwellers.

Purulia at a glance, with travel information.