Chinsurah may sound an unfamiliar name to many as it is not prominently marked on the tourist map of India. Chinsurah is an important city in the Hooghly district of West Bengal and is also the administrative headquarters of the district. Often known as Chunchura or Chuchro, it was part of the ancient Bhurshut kingdom. Today I will take you through Chinsurah while peeping into its glorious colonial past.

Bhurshut was a medieval Hindu kingdom comprising of areas including the present district of Howrah, Hooghly and surroundings. It was during the reign of Mughal Emperor Akbar that he included the Bengal Subah in the twelve original Subahs of his kingdom after subduing the Baro Bhuiyas of Bengal. Meanwhile, the Portuguese established their colonies in the western part of India including Goa and Cochin.

The Portuguese attained trade rites from the Mughals and established their colony in the Bandel-Hooghly-Chinsurah area in around 1571-1576. The city became a vital Portuguese trade port in the Eastern region. Fort Ugolim was built and a church was constructed in the year 1599 which is now known as Bandel Church. After the siege ordered by Emperor Shah Jahan in 1632, the Portuguese had to flee from Bengal.

(Read about the colonial past of the neighbouring town of Chandannagar.)

With the approval of the Mughals Subehdar, the Dutch East India Company or the United East India Company or VOC (Vereenigde Ostindische Compagnie) began trading with Bengal from 1615. In 1635 they established a settlement in Chinsurah. Trade of opium, saltpetre, spices, cotton and indigo flourished from Chinsurah port. In 1656 a factory was erected in the city which was later walled and rebuilt into a fort in 1740. In 1742 it was renamed, Fort Gustavus after governor-general Gustaaf Willem van Imhoff.

Trade flourished in the Bengal Subah of the Mughal Empire to such a great extent that the Dutch East Company allowed Hooghly-Chinsurah to trade directly to the Dutch Republic bypassing Batavia (present-day Jakarta.) During the mid of the 18th century, the Dutch control over Bengal was gradually fading with the rising power of the British especially after the Battle of Plassey. In 1759 the Dutch lost the battle of Chinsurah to the British and in 1795 the British took over the Dutch Bengal in accordance with the Dutch settlement of Chinsurah.

However, the Anglo-Dutch Treaty of 1814 helped the Dutch to get back the Chinsurah settlement. Later on, with the revised Anglo-Dutch treaty of 1825, the Dutch gave up all their establishments here to the British in exchange for Sumatra. After the British acquisition of the area, it became a major military centre for them. It became the reception area of the troops arriving from England. In the 19th century, Fort Gustavus was demolished to make way for the British Barrack. Chinsurah remained under British occupation till Indian independence.

With this small historical introduction of the city, I come to the present day scenario where only a few of the yesteryear structures remain while the rest rules the pages of history. I took a tour of the city to explore a few spots. Starting from the ancient Basilica of the Holy Rosary which is commonly known as Bandel Church. This ancient church has an interesting past. As the Portuguese settled in the Bandel-Hooghly-Chinsurah area, along came the religious bodies who started converting natives. The Augustinian Friars were the largest religious body affiliated to the Portuguese in Portuguese ruled Goa during the 16th century. They were enlisted for their religious services in Hoogly and its surroundings.

Thus the church in Bandel was built in 1599. After their flourished trade in spices, opium, indigo and silk the Portuguese gradually turned into the slave trade capturing women and children and committing plunder and loot. To control this political disorder the Mughal Subahdar with the order of emperor Shah Jahan expelled the Portuguese and burnt the church. While fleeing the believers tried to carry the statue of Mother Mary across the river. Unfortunately, it was lost in the water and was later found by the locals on the river bank.

The emperor ordered death sentence for the priests and the other captured Portuguese. They were destined to be trampled under the feet of Elephants when to everyone’s awe, a miracle happened. The elephant instead of stomping the priest lifted him up with its trunk and placed him on his back. The emperor was surprised and withdrew his punishment and set them free and also gifted them with a piece of land on the bank of river Hooghly. The new church was reconstructed on ruins of the previous church in 1660 and the statue of Mother Mary was reestablished. In the year 1988, Pope John Paul declared the church as a Minor Basilica.

Then coming to the famous Imambara which was built in 1861. It was built by Haji Muhammad Mohsin, a prominent philanthropist who played a major role in helping thousands of victims in the Great Bengal Famine of 1770. The Imambara was built as a mosque and a congregation hall. The building has a remarkable clock above the entrance gate between the high twin towers. While the rest of the building is double storied.

A flight of 152 steps lead to the top of the tower. One tower is designated for the females while the other is for the males to climb to the top. One can witness the beautiful aerial view of the river with the backyard of the building from the top of the clock tower. The clock of the tower was manufactured in London. It has two dials and three bells, the smaller bells ring at an interval of 15 mins and the larger one rings hourly. There is a sundial at the rear portion of the building facing the river. The mosque has texts from Quran engraved on its wall.

The next spot is a British built Edwardian clock tower, popularly known as ‘Ghorir More’. This cast-iron clock tower is located on a cross-section of roads leading to major parts of the city. ‘Ghorir More’ brought us to Chinsurah Church CNI that was built in the year 1825. Then we visited the Armenian Church of St. John the baptist. The church was built during 1695-1697 by Armenian Khojah Joseph Margar whose foundation stone was laid by the last Dutch governor of Chinsurah. The church was rebuilt in 1822 when the present spire was erected.

Our next destination was the Dutch cemetery which is now maintained by the Archaeological Survey of India (ASI). This cemetery houses the remains of many Dutch settlers of the period shrouded under a variety of mausoleums, simple graves or tombstones. The grand mausoleums were built according to the architectural pattern prevalent during that period which was also seen in the southern part of Dutch India. The oldest of all the graves dates back to 1743 which belonged to Sir Cornelius Junge. The cemetery has the remains of 45 Dutch residents. Many prominent Dutch people of the period were buried here.

The tomb of Sussana Ana Maria was the final destination of our day trip to Chinsurah. Sussana Ana Maria Verkerk was a Dutch lady who was buried here in 1809. An interesting local lore that revolves around her name may have inspired Ruskin Bond to write the novel ‘Sussana’s seven husbands’ again on which the Bollywood movie ‘Saat Khoon Maaf’ was based. Sussana Ana Maria married Pieter Brueys, the Dutch director of Bengal. After his death, she married a wealthy Englishman Thomas Yeats. 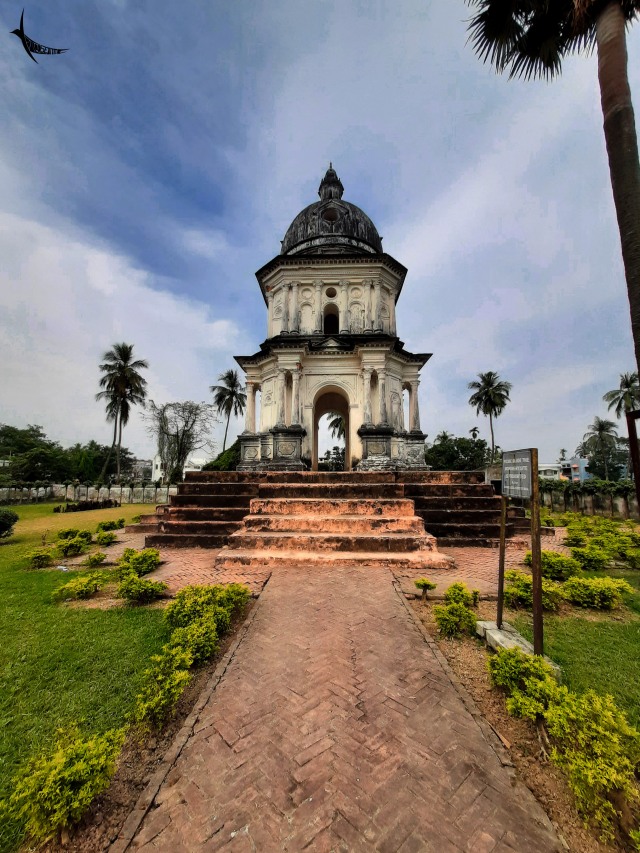 Records of two of her husbands were found but nothing is known about her other husbands that the lore tells about. The Sussana Ana Maria’s tomb remained popular thereafter as ‘Saat Saheber Bibir Kobor’ (grave of the wife of seven men). With this interesting lore and an unfulfilled wish to know the truth behind the legend, I end my journey through Chinsurah.

Matching matching... Rose from my garden matches with the neighbouring African Tulip flower.🌷🌹
পৌষ পার্বণে পিঠা পায়েস ।
Patterns in Nature
Lets start the new year with the message to just be positive... Happy New Year
Looking back on the last day of the year... Bye bye 2021👋
Santa Claus is coming down
Loading Comments...
%d bloggers like this: