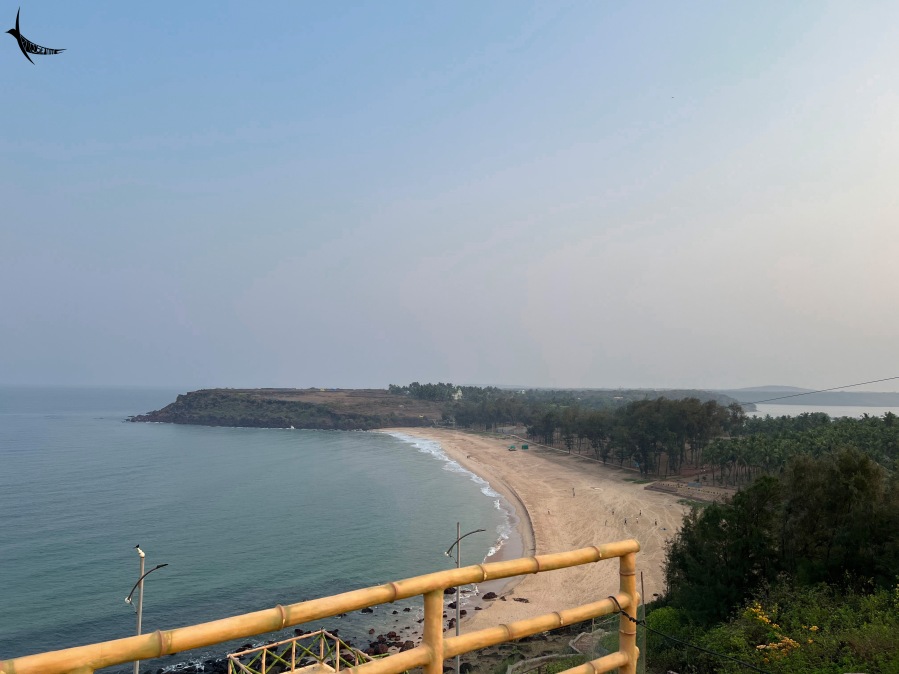 This summer on a mango hunt we went to Devgad. Though not a popular summer destination like the cool mountains but a treasure trove that unveils only in the hot sultry summer month. Yes, we went to Devgad for its treasure of Alphonso mangoes and as a gift that came along was the tour of the surrounding coastline and the impregnable sea forts. My tour to Devgad was not only scenic and serene it was also mixed with fun and adventure.

The coastal belt of Maharashtra is full of sea forts that proudly stand bearing the brunt of several invasions, weatherly attacks and yet no maintenance. Devgad, in the Shindhudurg district, gave us an opportunity to explore three of such forts. Though our main aim was to get Alphonso mangoes, but we also toured this beautiful destination even when the mercury soared high. (Read about my mango adventures from my previous post.)

A natural harbour (for small vessels), Devgad coastal town is located in Devgad taluka of Sindhudurg district of Maharashtra. Famous for its export quality Alphonso mangoes this town is more of a Mango-centric destination than a tourist destination. Although the serene small beach down the cliff with the small windmill farm beside and a small park is quite a crowd puller. It has ample scope for water sports and other adventure activities. In the afternoon, the park and the surrounding receive maximum footfall and the area becomes a bustling place.

We stayed very close to the beach and most of our visit to the beach was during the morning. We were there only on our last evening in Devgad to watch the sunset. The weather Gods were not so pleased and the sky was not clear and we could not experience the sunset that we expected to witness. No complaints about that as the rest of the tour was so fruitful.

Our sightseeing in Devgad started with a visit to the nearby Vijaydurg fort. One of the most ancient forts on the western coast of India, the Vijaydurg fort was constructed by Raja Bhoja II of the Shilahar dynasty in 1200. Vijaydurg was then known as ‘Gheriya’, probably because the sea surrounded it on all sides. Later one side was extended to connect it to the mainlands.

With the fall of the Shilahar dynasty, the fort came into the hands of Devgiri Yadavas. The region along with the fort was then conquered by Krishnadevaraya of the Vijaynagar Empire only to come under Adil Shah, the Bahamani Sultan in a bloody battle that lead to the defeat of the previous and severe damage to the fort. In 1653 Chatrapati Shivaji conquered the fort defeating Adil Shah. To commemorate his victory he named the fort ‘Vijay Durg’. Shivaji extended the fort and strengthened it further with three layers of fortification making it a major base for the Maratha warship.

The strategic location and the impregnable fortification made this fort formidable. The Waghotan/Kharepatan creek offered a natural barrier to the fort obstructing the big ships from the sea while obscuring the anchored Maratha warships. This impenetrable fort was named the ‘Eastern Gibralter’ by the British. Much later after the death of Chatrapati Shivaji, Kanhoji Angre was appointed as the admiral of the Maratha naval army. He made Vijaydurg his capital and ruled his territory. The British-Peshwa treaty and the eventual battle of Vijaydurg marked an end to the glorified rule of the Angres as the invincible naval force along the western coast and also brought an end to the eminence of the fort.

We were there during the mid noon and the sun above us was scorching bright. We decided to take a boat ride around the fort before entering it. As the boatman took us around the fort while he laid his line with an attractive hook in the hope to catch some fish which he often does on this half an hour tour. We watched the magnificent fort with a strong fortification that proudly holds the canon ball marks announcing its invincibility. As we returned back to the jetty the boatman pulled his line back but with no luck.

We entered the fort and the hot summer sun was making it unbearable. We explored the ruins of the majestic sea fort and then happily took refuge for some time under the trees that provided the much-needed shade and the cool breeze to soothe our burning skin. While we were making an exit a gentleman approached us with a photo album saying that he owns a restaurant that serves homemade food prepared by his wife with lots of love and care. He invited us to go to his restaurant and have lunch. His restaurant is located just opposite the port, where we parked our vehicle.

We could not ignore his generous invitation with a sweet smile so we came to the Mayuri restaurant overlooking the bay by the port to have our lunch. He followed us immediately and took the order of veg thali with ‘Ragi Bhakri’. He along with his family runs the restaurant business in an open-air building in front of his house. It is more of pure hospitality than business. All were so cordial and welcoming that it seemed we were the guest in their home and they happily served us food with lots of affection and care. He served us ‘Ragi Bhakri thali’ (bhakri is a traditional flat bread made of flour other than wheat, here it was made of ragi).

The thali looked so pretty with multiple Konkani traditional food items. It had different types of vegetables, dal, papad, two sweet dishes, Aamras, Solkadi and a variety of chutneys and pickles along with roti. The thali also contains rice which we denied from the beginning as the thali already looked sumptuous and there would be no more space in our belly for any other items. They kept offering us the food items every now and then, just as every host of a quintessential Indian household or an Indian mother does. We were extremely elated by the taste of the food and their hospitality.

The man – Suresh Jawkar, opened the restaurant in his eldest daughter’s name – Mayuri and to create a brand image he gave a very adorable picture of Mayuri as a child. After our lunch, he showed us his home and the compound around, he introduced us to his wife who cooks all the delicious food with some help from the other lady who was also around with a smiling face always. We were so happy to experience the Konkani hospitality that I would love to recommend my readers to definitely pay a visit to Mayuri restaurant when on a visit to Vijaydurg fort and enjoy the warmth of the family and the delicious traditional food.

From Vijaydurg we returned back to Devgad and then to Devgad fort on the cliff facing the sea. This fort was built by Duttajirao Angre and was under the great Maratha admiral Kanhoji Angre for a considerable amount of time. After the fall of the Maratha empire, the fort came under the British and today only the fortification remains with three canons, a Ganapati temple and a functional lighthouse. My regular readers already know my inclination towards lighthouses. So where there is a lighthouse there is me. (Read my other lighthouse experience here – the lighthouse in Little Andaman, the lighthouse in Puri, the lighthouse in Ratnagiri fort).

Even though this lighthouse is a small one, being on the side of the cliff it provides a beautiful panoramic view of the surroundings – the sea and the backwaters and the windmill farm at a distance. The lighthouse is open to tourists from 4-5 PM with a nominal entry fee. After satisfying my desire of visiting the lighthouse we returned back to our stay ending our day on the balcony with the cool sea breeze and the sounds of the rotating wind turbines. This windmill farm caters to the electricity need of the Devgad town. Yes, we also had an amazing dinner in the famous fresh seafood restaurant – Vasant Vijay which operates strictly from 12-3:30 PM and 8-10 PM.

The next day we went to Sindhudurg fort. The fort was built by Chatrapati Shivaji, between 1664-1667 on an island called Khurte. He commissioned this fort to monitor and thwart the growing influence of the English, Dutch, French and Portuguese merchants and also the Siddhis of Janjira. The huge strong fortification around the island dissuaded any approaching enemy soldiers. The main entrance to the fort was thus disguised within this massive wall that could hardly be identified from the outside.

Today the fort is the remnant of the skilled Marathas warriors who prevented the attacks from the outside forces by building such massive sea forts. This fort is now a habitable, village where many families continue to live generation wise since its construction. Though many have moved out of this island in search of better employment opportunities, others adhered to their ancestral land within this fort, now running small food or beverage business for the tourists who visits the fort.

After delving into the rich Maratha history we sailed back to the mainland to return back to Devgad. On our way, we drove through the coastal road that gave us some mesmerising views of the sea and the undulating coastline protruding into the sea at some place and moving back just after. In this way, we reached the beautiful Kunkeshwar temple just beside the Kunkeshwar beach. Finally, the coastline took us through the scenic Mithmumbari and Taramumbari beaches to our temporary home in Devgad.

Thus we ended our mango-filled, adventure-filled, funfilled, serenity-filled days on the Konkan coast of Maharashtra in the hot sweltering summer. The scorching heat and the humidity could not dampen our spirit of exploring the city and the surroundings and this quest for mangoes already made me plan our visit to this place again the next summer. With the plan for our next visit the next summer, we ended our fruity, pulpy, summery tour to Devgad.

2 thoughts on “Devgad in Summer”