A day of complete rest, followed by a day of relaxed sightseeing, we were now confident enough about our health in this high-altitude terrain. So we dared to travel a little far for our second day of touring in Ladakh. Sticking to our itinerary we started for the Lamayuru circuit. Lamayuru (11515 ft) is located on the Leh-Srinagar highway at a distance of more than 100 Km from Leh. Lamayuru or Lamayouro is known for the Lamayuru monastery situated on the slope of the hill overlooking the beautiful green village within some alien landscape.

We started early as the distance to cover was more and we were not aware of the terrain and the road conditions. Packing all our gears and necessary items we started off for the day through the same road that we took the previous day to visit the Hall of Fame. (Read my previous post on my first day of touring in Ladakh.) To get a detailed guide to tour Ladakh, read my first post of the Ladakh series.

On the Lamayuru circuit, we have quite a few places of interest and the landscape en route on a road journey is always an added perk. We were on our bike this day also travelling on the Leh-Kargil-Srinagar highway. As we rode past the Hall of Fame museum, we came across the river Sindhu flowing gracefully through the plains of the land. We went past many outposts on the route which was a road through the barrenness. As far as the eyesight reached it was an overdose of blue above and a vast stretch of brown below.

Beautiful roads through such landscape brought us to Gurudwara Pather Saheb. There were many vehicles parked outside indicating a good number of visitors. We were prepared for the crowd of religious places, but to turn us wrong things were very organised and neat inside. This place has a legend associated with it. Guru Nanak Dev Ji, the first guru and the founder of the Sikh religion is believed to conquer a demon here. Guru Nanak Dev was meditating when a demon threw a stone to interrupt his concentration and harm him. The stone miraculously turned into soft wax which could not harm nor bother him. The demon realised his mistake and asked for forgiveness. The boulder with the impression of the back of Guru Nanak Dev and the footprints of the demon is on display within the Gurudwara.

Feeling blessed after visiting this holy site, we moved on to the next and the most popular destination – Magnetic hill. Who does not know of the famous Magnetic Hill in Ladakh? I need not share any details about this place rather I would share what I saw. There were a lot of vehicles, probably all waiting to feel the gravity-defying experience of the place. There was a yellow signboard saying “MAGNETIC HILL The phenomenon that defies gravity. Park your vehicle in the box marked with white paint on the road”. Though we did not find any such white-painted box on the road within this gathering of vehicles. We did manage to click some crowd-free photos before moving on from this amazing-looking place.

Then riding by the Indus on the rugged terrain we reached the confluence in the picturesque Nimmu valley. Originating in Western Tibet the river flows northwest through Ladakh to meet the Zanskar that originates in the Greater Himalayas and drains the Zanskar region. These two rivers with almost similar volumes of water merge to flow as the mighty Indus which travels further northwest all along the route that we were traversing that day. We kept twisting and turning through the curves of the mighty mountains as the Indus guided us along.

We happily rode through the almost empty road occasionally crossing some solo bikers or some biker gang waving or nodding at each other as a sign of mutual respect and encouragement. Thus, through the deserted landscapes and intercepting green villages, we reached Alchi (10000 ft). Alchi village is famous for having one of the oldest Buddhist monasteries in Ladakh. We were riding through the straight road also keeping an eye on Google Maps. Till then all our destinations fell on the main road so there was no confusion and doubt. Reaching Alchi village, there were a few narrow lanes so we did ask the locals for the direction to the monastery (no any more trusting Google Maps solely.) 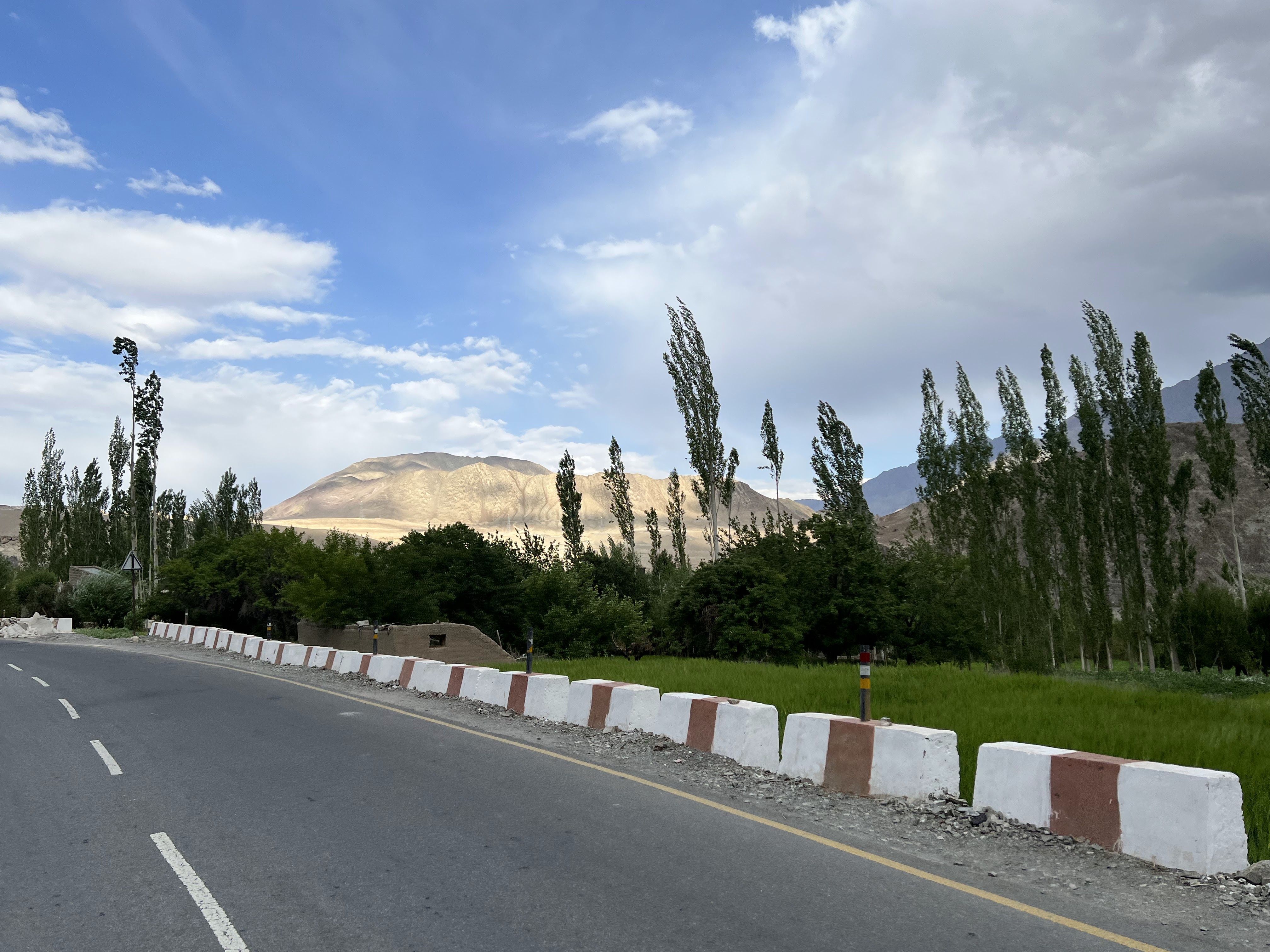 As we thanked the locals for showing us the direction we were greeted with ‘Julley’. Which we later learned to be a general and most commonly used form of greetings in Ladakh. We reciprocated saying ‘Julley’. Alchi Monastery is located near the bank of river Indus within the green shades of Apricot and Poplar trees. The village itself is a green paradise with farms and fields dazzling in the bright green of barley and yellow harvest of mustard. The Alchi Monastery is more of a monastic complex comprising three temples with extensive wood carvings, ancient paintings and huge statues of Buddha.

After purchasing the entry tickets (there are entry tickets for every monastery we visited in Ladakh) we were asked to drop our cameras, phones and bags in the lockers within the cloakroom. Photography is prohibited within the premises of the complex. The monastery complex was believed to be built by the great translator Guru Rinchen Zangpo between 958 and 1055. The inscriptions preserved within the monuments credit the construction of the temple to a Tibetan noble Kal-dan Shes-rab in the 11th century. We visited the complex just before the hourly lunchtime closure which saved our time for the rest of the journey. After having some local lunch in the adjoining Alchi Kitchen, we were again on the roads towards Lamayuru.

The weather was changing from a bright sunny day with a clear sky to a windy day with patches of cloud flowing by. We were now through some treacherous paths winding on high gravel-filled mountains. Although the roads were well paved there were frequent warning signs of loose gravel. In many places, there was gravel that fell on the road from the adjoining hill slope making the ride more dangerous. While on the other hand, the cold wind was gaining speed and was strongly blowing against us making the ride even more difficult. We were a little anxious about such weather and road conditions and the deserted long patch with only the Indus flowing in the gorge below.

After a very long stretch of a lonesome ride, we came across a few bikers going in the opposite direction. Nodding and waving at them we gained back some motivation and we reached the strange landscape. The sun came back from the veil of the clouds and the alien land lit up in its aura of golden light. A signboard showed ‘Moonland’ written on it. It was called ‘Moonland’ because of its unusual topography which probably resembled the soil on the moon.

There was a lovely glow in the sky with the sun shining through the clouds making the sky look dramatic and also the land was radiant in its golden hue. We were the sole visitors to this beautiful monastery on the hill overlooking the village filled with a velvety green sheet. All our apprehension and our anxiety vanished in a moment. The peace prevailing within the monastery left us content and relaxed all our senses. Spending some time within this magical atmosphere we left for our long journey through the same treacherous way back home (our hotel in Leh, our home for a few days.)

This time we were more confident about the road. But the chill in the air increased as the sun was coming closer to the horizon. We were again on the gravel slip area riding carefully when all of a sudden we saw a considerably big boulder rolling down from the corner of the road to the gorge below finally dropping into the river. It must have rolled down the hill on the other side of the road and down to the river. Luckily it happened 30-40 meters ahead of us. The little time and a little distance saved us from a major accident. It was my husband’s first ride on such high-altitude terrain and I was just the pillion rider and the navigator planning to ride myself some other day.

Again through the same mostly isolated route, we were back to Leh. By then we were tired and cold – tired as we were on the bike for a long time after a very long time and cold because of the chilly weather and the strong biting winds. It was one of a kind adventure for us though it may sound dull to others and definitely to the pro bikers. We ended our day feeling happy, relaxed, thankful and blessed, expecting more of an adventure the next day. Stay with me for my upcoming blog post on my next day trip.

A riot of colours in Leh-Manali highway on the way back from Hemis to Leh
The confluence of Indus and Zanskar in Nimmu valley Ladakh
The dramatic sky and the radiant land in Lamayuru
On International Tiger Day
एक गरम चाय की प्याली हो
As the Palki goes to Pandharpur, many pilgrims join the procession by foot from various parts of Maharashtra. This is an ancient tradition almost 700 to 800 years old where the 'Warkaris' who perform the 'Wari' (Yatra by foot to Pandharpur) carrying the 'paduka' of Saint Dnyaneshwar and Saint Tukaram from their respective shrine to Pandharpur. Here is a small batch marching to join the procession.
Loading Comments...
%d bloggers like this: