Leaving behind Leh for the next few days we ventured North towards the once famed highest motorable road – the Khardung La Pass (17,582 ft). With a lot of excitement and the Inner Line Permit handy we began our journey in a rented car with a local expert driver also leaving behind the bike that was our companion for the days in Leh. After an initial check of the permits, our fast ascend began winding through the mountains to reach the Khardung La. This pass connects the Indus river valley and the Shyok river valley and forms the gateway to Nubra Valley.

Built and maintained by the Border Road Organisation this high mountain pass is a vital road link to maintain the supplies to the Siachen glacier (18,875 ft), the second longest non-polar glacier in the world and the highest battlefield in the world. Khardung La was equally important in ancient times as it connected the trade route from Leh to Central Asia through which caravans of horses and double-humped Bactrian Camels used to pass with innumerable valuable goods loaded on them. Some of these Bactrian Camels of Central Asia were left behind and they thrived successfully in conditions similar to their homeland. A small group of these camels are now seen in Hunder in Nubra valley.

The snow-capped mountains lured us from a distance from the time we landed in Ladakh. Finally, we were on the snow-capped mountains for the first time on our trip. Apart from being a strategic point, Khardung La is a major tourist attraction these days. No visit to Leh is considered complete without a visit to Khardung La. As a result, this point witnesses heavy traffic. The place was full of vehicles, their diesel exhaust fumes and also a large number of people. People were literally crowding and fighting for the spot near the iconic Khardung La board.

Seeing people fighting for the best spot to take pictures was quite amusing. Some elderly people shouted that they should be given the opportunity to take photos first as there is little oxygen and they need to wrap it quick. Unknowingly everyone missed the kid who was happily photobombing every family or group photo from behind. Finally, someone noticed and asked whose child it was and everyone answered not ours. But he was there in every photograph while we watched. We then got our chance to get ourselves clicked in front of the board and unperturbed the kid was still there.

After all this funny encounter we played with some fresh white snow before we started our descent towards Nubra valley. Road widening work was in progress while we reached the other side with the Shyok river valley in view. It was a long stretch of a barren patch with the murky water of river Shyok making it hard to distinguish between the water and the land below.

Crossing North Pullu and then Khalsar we reached a bifurcation of the road, the right one leads to Sumur and Panamik and the left one leads to Diskit and Nubra valley. I had Sumur and Panamik in my initial itinerary of Ladakh but later had to drop them and keep them for my next visit to Ladakh. (Read about my itinerary and why I had to change it.) We took the left road towards Diskit. Diskit is a small village with a monastery built on the top of the hill overlooking the Shyok river.

Diskit monastery is a sub-monastery under Thiksey, belonging to the same Gelug (or the Yellow Hat) sect. (Read my previous post on Thiksey monastery.) It is one of the oldest and the largest monasteries in Nubra valley. The monastery was founded by Changzem Tserab Zangpo in the 14th century. The residence of the head lama of the region is located at the foot of the hill where there is a large (32 mt) embellished statue of Maitreya Buddha on a raised platform. The construction of the statue began in 2006 and was consecrated by the Dalai Lama in 2010.

The large raised platform around the statue offers an incredible view of the Shyok Valley and the sand dunes at a distance. The crisp atmosphere and the bright sunlight here provide you with the extravagance of long-distance visibility. Such raised platforms on the hills offer the golden chance to capture the panoramic view of the vistas. After spending some quality time here we moved on toward Nubra Valley. Soon we reached our previously booked stay in Hunder. It was situated very close to the sand dunes and within a pretty green surrounding. 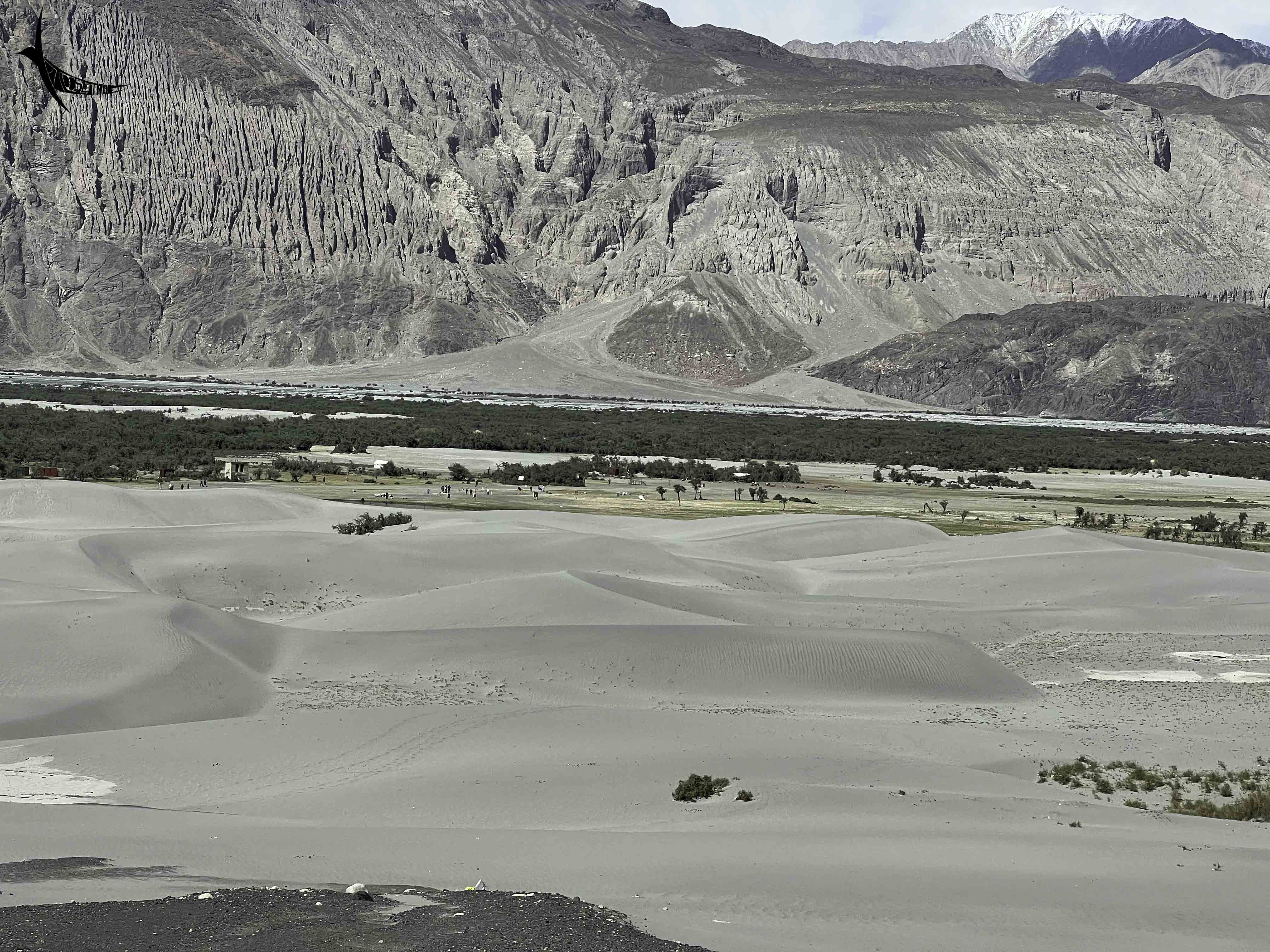 A small village situated within the valley closely guarded by mountains on either side, the landscape was so different from what we saw before in the other parts of Ladakh. The hotel’s surrounding was so lush that there was an abundance of tiny to medium-sized birds fluttering all around. A Hoopoe couple occupied the backyard and probably nested in the trees that demarcated the property from the adjacent one. Unwilling to disturb their nesting site, we watched from our cottage window how the diligent parents brought food to their chicks.

We then visited the Hunder sand dunes. Many vehicles were parked in the parking area, saying a lot about the popularity. We actually had a tough time booking the hotel online as there was a huge rush and almost all the other hotels of choice were booked. We walked towards the sand dunes and saw the double-humped Bactrian camels waiting to take people on a ride to the dunes. There were many calves in the group too, looking a bit perplexed.

The camel-man took the mother camels with passengers for the joy ride to the sand dunes which made the calves insecure. They started grunting and grumbling and probably complaining to release their mothers. When the camel-men turned deaf ears to all the appeals, they followed the caravan howling at the top of their voices. It was really sad to see the calves crying in this manner. It seemed unethical to me but the other side also has a different story. This is the only source of bread and butter for these men. Presumably, this is the work of the Bactrian camels here, carrying passengers, they are bred here for this purpose, they have been into this business for ages.

Then they used to carry passengers and valuable goods from one place to another in caravans and now they are the vehicle of a joy ride. Humans have used animals for their benefit since the beginning of civilisation and these domesticated animals have passed on the genes to their present generation. They are bred to perform the jobs assigned to them by humans so what was it that was bothering me? Even after analysing every aspect, I felt sad for the calves who followed their moms helplessly to the sand dunes. I could only wish for kind treatment of these animals by humans – be it their owner or the passenger who takes a ride on them.

We did not go for a ride but rather ventured towards the sand dunes on foot. Meanwhile, we came across a camel-man with his camel walking from the village end towards the starting point of the joyride. It seemed he was late to join the business for the day. We loitered around watching the tall Maitreya Buddha statue of Diskit, at a distance. The topography and the soil condition of this place are again so different. The wind and the water together weathered the hills, the valley and the rock floor, eroding them into small pebbles and smooth sand. Like children, we started looking for some uniquely shaped attractive pebbles and we did gather a couple of these. These were probably one of the best natural souvenirs that we brought back from Ladakh.

After some quality time, we returned back to our stay. Here the electricity is not in abundance so there is a good rationing policy across the region. Electricity is available only in the evening from 7:00 PM to 10:30 PM. For the guests, our resort provided gen set backup for one light in the room, one light in the bathroom and one charging point for 24 hours. There are a few hotels that provide 24 hours electricity on the gen set back up. With our initial misplan we had to extend our stay in Nubra for a night and we had no hotel booking for the next night. My initial plan was to return back to Leh (which was unnecessary and not recommended) the next day after seeing all the places of interest here and then start to the next destination in the south.

We were in a difficult position as our resort was fully booked for the next day and all the online booking sites were showing all other properties as full. It was the peak tourist season and a very huge vehicle influx in the evening made the scenario very clear. We were a little tensed about finding decent accommodation for the next day. With all the weird thoughts of sleeping in the car and using public toilets, we kept walking around the resort after dinner.

It was the final waxing phase of the moon and the moon showed up big and bright from behind the mountains. Its silver light lit up every corner of the place and also our minds and all our worries disappeared in a moment. There was serenity all around, smitten by the beauty we gazed at the moon. The chilly winds blowing across our faces brought us back to our senses. We retired to our room and finally to our bed dreaming of a fantastic trip the next day. The chilly night with strong winds gushing against the canvas roof of our cottage and the darkness around lulled us to sleep. Stay with me to know what happened the next day.

Read my experience in Leh.

Read my experience in Lamayuru.

3 thoughts on “Ladakh Part 4 – To Nubra Valley, via Khardung La”